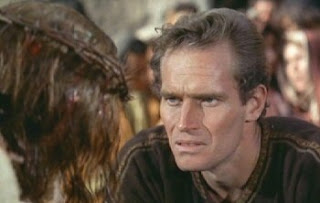 Well, well, well- got stuff to do to get ready for the festivities this weekend and need some downtime to relax, but you don't want to get out of that holiday spirit? Well don't worry the ol' perfesser hisself (that's me) yer old Uncle Loophole has some classic film recommendations to help you unwind and keep you inspired. Sure, there may be a couple of no-brainers here, but then who's the perfesser. Yes, yes- I know how to spell it correctly, no need to be a smart alec, I'm just changing it up to kinda make it sound funny in your head...as you read it- oh, never mind. Here we go with Professor (are you happy now?) Loophole's Classic Film recommendations for the Easter season: 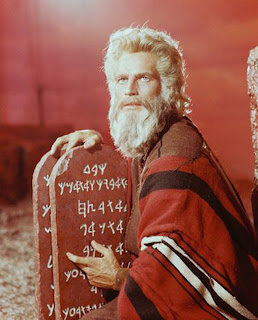 You knew this was coming, so you shouldn't act all surprised. Unless that's sarcasm there, in which case if it is, cut it out. Only I am allowed to be sarcastic in class. Anywhooo- what better way to kick off this whole week than by catching a viewing of The Ten Commandments. It's usually run this time of year, and in the past on network television. I don't really know if that's the case this year or not, but it's on DVD and readily available so there is no excuse to miss it. It's long, and at few places, kind of slow- but it has a steady pace and a vision that is sustained throughout the film. Christians and Jews celebrate a common heritage with this story and it has iconic performances from Charlton Heston and Yul Brenner; not to mention it has a cast of thousands. They don't call 'em Historical Epics for nothing. 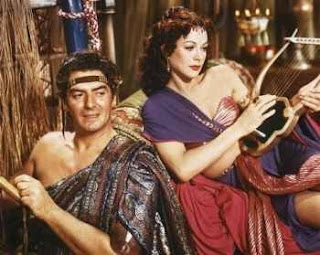 Sticking with DeMille for a moment here...while this film is technically not about Easter or even Passover, there is something powerful in the story of a hero falling and then struggling to redeem himself, even if it is one last act. Victor Mature and Hedy Lamarr head up a great cast in this Biblical epic. It's a great film, and one of the few films that I think made effective use of Victor Mature. It even starts with an older man telling children the story of Moses - so what a segue from our previous entry! The bad news is that for some reason this film isn't readily available on R1 DVD. The good news is that right now a copy has been loaded up on Youtube. I won't show it here because of it's length, but here is the link to Part 1. 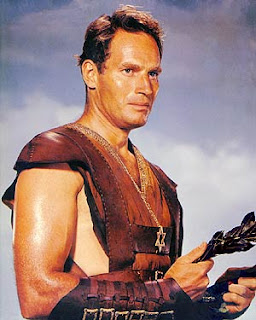 Another iconic performace from Charlton Heston, in a very powerful film. It is a great tale and a great movie, but I feel it is most effective and touching in it's more subtle moments. We've all been betrayed by something, or someone- and we've all been failed or have failed at one point or another- and maybe we can relate to being driven by something that almost consumes us. But have you ever been touched by something so above you, so...inspired that you've sought high and low for it again? This is what really moves me about this film- the small moments, the inner thoughts and working of the hero's mind as brought out by Heston's fine performance- all coalescing and coming together later in the film. A man consumed by revenge, who literally sees the hand of Jesus, but then throughout his persuit of revenge doesn't see the hand of God moving in his life until later. His bitterness is healed. A fine and moving film. The Four disc DVD Special Edition set is the way to go with this one. Here is one the great scenes from the film:


By the way- allow me an indulgence and depart from our lesson for a moment and commend the fine, fine musical scores that always accompanied these films. The soundtracks are wonderful to listen to on their own as well, especially the great theme from Ben-Hur composed and conducted by Miklós Rózsa. Ok- back to our list. 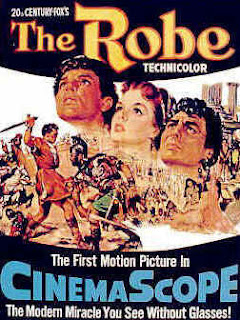 Released on DVD recently, I was able to catch up with this film, after not having seen it since I was a child watching Sunday afternoon television. Richard Burton plays Marcellus Gallio, a Roman military tribune assigned to oversee the crucifixtion of Jesus. After winning the robe of Jesus in a dice game, Marcellus Gallio begins to be strangely affected by the Robe, which eventually leads him first to get rid of it, but in the end his journey leads him to accept a different path. Victor Mature shows up as Gallio's slave, who later becomes his friend.

King of Kings/ The Greatest Story Ever Told 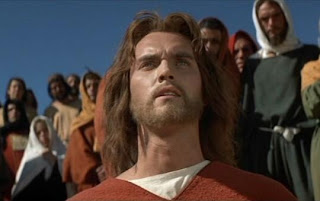 These two films are focused on the life of Jesus and are epics in their own right. Jeffrey Hunter stars in the lead role in King of Kings, which places an emphasis on the miracles and redeeming nature of Jesus. The later film stars Max Von Sydow in the role, who leads a large cast of stars, many of them making cameo appearances. Both movies are fairly long, which is to be expected with a Biblical epic film.

Lighter Fare:
There is also a lighter spirit and fun to be had...
Easter Parade 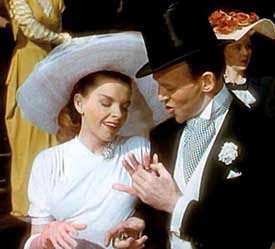 One of my favorite musicals. The film stars Fred Astaire as song and dance man, Don Hewes, who's leading lady (and girl) has been stolen away for solo stardom. Hewes desparately searches for a new partner and finds one in niave rookie singer Hannah Brown, played by Judy Garland. Hewes is determined to show up his former flame and partner by training and making a star of his new protege, but as the laws of Hollywood Musicals would have it, he didn't count on falling for Hannah as well. The film contains some great numbers, but it's centerpiece is Irving Berlin's "Easter Parade" and of course the great Easter gift shopping scene where Astaire peforms "Drum Crazy" (below).

It's the Easter Beagle Charlie Brown. 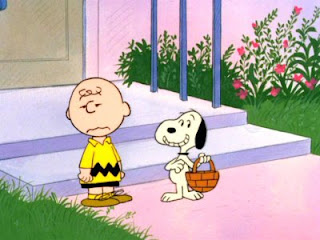 It's a Charlie Brown holdiay animated special. 'Nuff said. Ok - maybe a little said. I am the biggest Peanuts fan you will run into, so maybe I am prejudiced, but the scenes with Peppermint Patty trying to dye eggs with Marcie are a scream. And of course, it's a little messed up that it's Linus preaching the good word about the Easter Beagle. I mean, he got the whole Christmas thing right- and sure, The Great Pumpkin is just plain weird, but he's a good kid, so we'll forgive him this little quirk. But in light of new evidence of his evangelizing for an Easter Beagle-somebody's got to get this kid in therapy. That being said, it's still one of the classic Easter cartoons and an annual favorite. (Get some help Linus!) 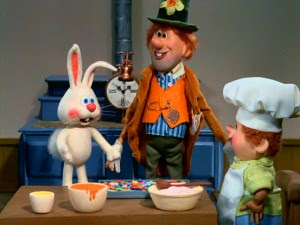 Didja think all that Rankin Bass did was Christmas? Not even close. They've got three, yes- count 'em, three Easter animated specials. First there is The First Easter Rabbit, told and sung by the great Burl Ives, about a stuffed rabbit who is brought to life and given a mission to bring Easter treats to children. Next there is Here Comes Peter Cottontail, narrated by Danny Kaye. This delightful special tells the story of young Peter Cottontail, who is racing through the holidays of the year in an effort to defeat the evil Irontail, and become the next Easter Rabbit. Lastly, and my favorite of the three, is The Easter Bunny is Comin' to Town, narrated by Fred Astaire. This classic tale shows how Sunny the rabbit and his friends in Kidsville, are able to bring Easter cheer and fun to a place called "Town." Town has a kid for a King, but is told what to do by his tyrannical Aunt Longtooth. The thing that Aunt Longtooth does not want in Town is Easter and all the Easter treats and fun. Sunny and his companions find a way to get past old tyrannical Aunt Longtooth, and bring Easter to the kids and adults of Town in this classic favorite.

Well class- there is the list. A good time to be had by all, if you asked me. And if you didn't ask me too. So get to boiling those eggs, cooking that ham, and pressing your best Easter outfit, and pop in one of our recommended titles. They are sure to keep that Easter spirit and inspiration going.

Almost at the moment He died, I heard Him say, Father, forgive them for they know not what they do. And I felt His voice take the sword out of my hand.

It's that time of year- sunny spring weather, religious holidays, a time for peace and reflection and as a bonus some chocolate bunnies and Easter cartoon specials! Networks used to show many of these during the season, as we've discussed previously. It should come as no surprise that I have a favorite or two, especially It's the Easter Beagle Charlie Brown! So without further ado, we present this years Shelf Easter Cartoon Special!

First up : It's the Easter Beagle, Charlie Brown

Some Easter Beagle! He gave me my own egg!