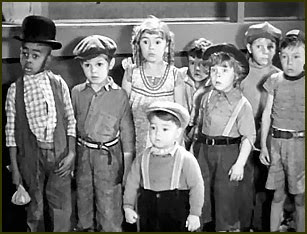 Welcome to 2011 everyone! I trust everyone had a safe and fun end of the year celebration. We'd like to kick things off here at the Shelf with a little TCM news and some great articles from around the Shelf Community of friends that we've read in the last week or so.

TCM in January is proving to be a DVR's worst nightmare- a perfect storm of too much I want to record and save and too little space to save it. While I long for the perfect technology where I can just store infinite amounts of classic films, television and special features on small, portable safe hard drives that I can watch or recall at a moments notice, I do appreciate the somewhat trusty, if imperfect and overworked DVR. Last night proved to be a true workout for my trusty 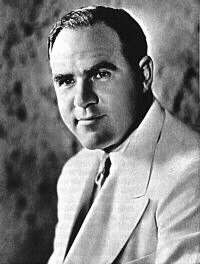 companion as TCM began it's monthly look at Hal Roach Studios with an Our Gang Marathon. I am a sucker for the Our Gang and subsequent Little Rascals shorts; I grew up watching them on early morning television and learned all about how to make scaled down working versions of firetrucks made out of junk and household items, as well as the stinky effects of Limburger cheese.

The marathon continues during the day today and Hal Roach studios will be the TCM Spotlight featured on Tuesdays and Wednesdays all January long. Also this month, TCM's Star of the Month is sardonic funnyman Peter Sellers. and you can expect to see Dr. Strangelove and The Pink Panther on rotation, but don't miss one of my favorites, Murder By Death, which is a funny spoof of classic film detectives and the mystery genre. I am eager to catch Sellers in After the Fox and I'm All Right Jack- both of which I've never seen. Set your DVRs appropriately. Later this month, TCM will also feature an evening of early gangster classic films: City Streets, Scarface, Little Caesar and The Mayor of Hell. The later three have been available on DVD and see some rotation on TCM, but this will be my first chance to catch City Streets, starring Gary Cooper and Sylvia Sidney (who replaced Clara Bow after she suffered a nervous breakdown). On January 12th, TCM will be celebrating Luise Rainer's 101st birthday by showing an interview with Rainer by Robert Osborne that was done at last years TCM Film Festival, as well as showing four of Rainer's films, The Good Earth, Dramatic School, The Great Waltz and The Great Ziegfled. After watching the advance screening copy of the interview, Ms. Rainer is a lively and interesting (then) 100 years old. 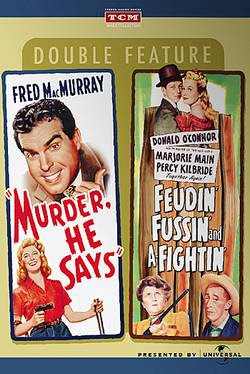 This month TCM will roll out another edition in their ongoing TCM Vault collection from Universal. This time it will be the double feature Murder, He Says/Feudin', Fussin' And A-Fightin'. Murder, He Says stars Fred MacMurray as a pollster stranded in the Ozarks after replacing the previous public opinion recorder, who is now missing. When MacMurray find the Hillbilly family the Feagles, headed by matriarch Mother (the awesome Marjorie Main), he realizes that he just may have stumbled on why he predecessor is missing: he's dead and the Feagles killed him. Feudin', Fussin' And A-Fightin' stars Main again this time with her erstwhile Ma and Pa Kettle costar, Percy Kilbride. Also starring Donald O'Connor as a traveling salesman who is coerced into representing the small town of Rimrock in an annual race with a rival backwoods town. This Double Feature TCM Vault collection will be available on DVD January 31, 2011.

In February, TCM will be rolling out their annual 31 Days of Oscar celebration. Each year TCM has presented Oscar nominated and winning films and performances in a themed presentation. This year the films will be presented in a Trivia style format with a different trivia marathon everyday. From the press release:
Turner Classic Movies (TCM) is getting trivial with its annual 31 DAYS OF OSCAR® festival in February. The 2011 edition of the month-long event will feature more than 340 Academy Award®-nominated and winning movies, scheduled in trivia-inspired marathons. In addition, each night will feature a Best Picture Oscar winner at 10 p.m. (ET).
TCM host Robert Osborne, who is also the official biographer of the Academy Awards and the Academy’s red carpet greeter, will host 31 DAYS OF OSCAR, which will mark its 17th year on Turner Classic Movies. The 2011 edition will feature several high-profile films making their debuts on TCM, including three Best Picture winners: Cavalcade (1933), Amadeus (1984) and Forrest Gump (1994). The month also includes the TCM debuts of the blockbusters Pretty Woman (1990) and Thelma & Louise (1991), as well as outstanding dramas like Hugh Hudson’s Greystoke: The Legend of Tarzan, Lord of the Apes (1984), Hector Babenco’s Kiss of the Spider Woman (1985), Spike Lee’s Do the Right Thing (1989) and Michael Mann’s Ali (2001).
Several excellent actress showcases are planned for TCM for the first time, including Janet Gaynor in Street Angel (1928), Loretta Young in The Men in Her Life (1941), Ingrid Bergman in Joan of Arc (1948) and The Inn of the Sixth Happiness (1958), Marilyn Monroe in Bus Stop (1956), Julie Andrews in Star! (1968) and Cathy Burns in Last Summer (1969). Also, such international classics as Hiroshi Teshigahara’s Woman in the Dunes (1964), 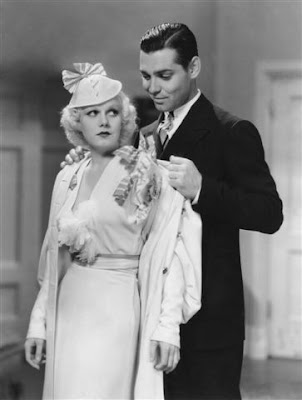 And in March, TCM's Star of the Month will be the original blonde bombshell, Jean Harlow! Some of the actresses films that will be featured will be Red-Headed Woman, Suzy, Riffraff, Libeled Lady, Wife Vs. Secretary and Dinner at Eight. I am personally looking forward to catching Reckless, Red Dust, Personal Property and her last film, Saratoga.

From some of our friends around the blogging community I've read several excellent "end of the year" articles that I would like to direct your attention to:
Our friend Laura at Laura's Miscellaneous Musings has a wonderful post about all the films she watched this past year- sort of like a classic film fan journal if you will. She has posted many great reviews of these films throughout the year, so if you are curious about any of the titles she mentions, please check out her reviews. Laura had a goal to watch 208 movies in 2010, and ended up with 211. No doubt she has a similar goal for 2011- talk about a New Year's resolution I would love to keep! Good luck, Laura, and as always we look forward to your "Tonight's Movie" reviews throughout the coming year!

The DVD Savant, Glenn Erickson, offers his thoughts on the past year in films and DVD output and where we might be going from here, as well as his 2011 Wish List. I found his article thought provoking and agreed with so many of his positions, such as 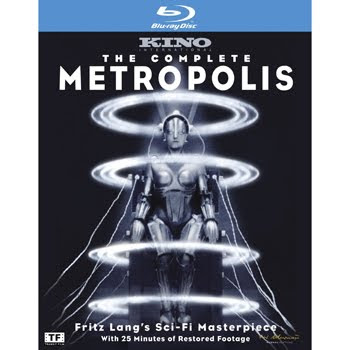 "Netflix and web streaming are terrific, but neither activity appeals to the basic motivation of collectors -- to possess one's own viewable copy of a favorite film. Specific titles can come and go at the will of the distributors -- a cool rare movie might surface, only to be withdrawn because of a rights issue or money dispute. The appearance of a remake in theaters might cue the disappearance of the original it is based on. Collectors are looking forward to the day when arrays of home-based hard drives (with backups) allow us to keep personal copies, but I haven't noticed any content providers championing that idea. As an individual inundated with disc product, having my collection stored on a digital drive, all backed-up and safe, sounds like a dream. " A dream others like myself share.... Also don't miss Glenn's Best of 2010 Disc List, a list that includes the much written about new to DVD, discovered & restored print of Metropolis.

Another one of our favorite movie bloggers and good pal, Jacqueline, had some great recent reviews of some under appreciated holiday classics over at Another Old Movie Blog. She posted wonderful reviews of Holiday Affair as well as The Shop Around the Corner (one of my favorites). The icing on the cake to me, though, was a great post on books for children about World War II that were written during the War. It seems she may be considering a possible book on the topic. Let me just say I hope she does, as I would love to read it! A great post, one well worth your time.

Lastly, John McElwee recently celebrated a five year anniversary of the always great and must read Greenbriar Picture Shows blog- congratulations John! The articles and pictures are can't miss as always, and I count myself as a fan from the very beginning of the blog! By the way- if you haven't already caught them- there have been several recent articles that are can't miss. First, an excellent three part series review of White Christmas, and this post with John's unique perspective on Frank Capra's romantic comedy, It Happened One Night.

Thanks for reading and stay tuned...