the case for thanksgiving, part deux 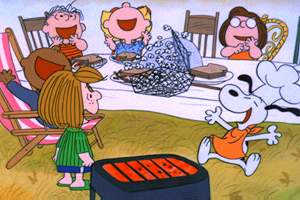 Shelfers, in the midst of your traveling and cooking or cleaning for the holidays, we hope that you will take the time to bow your head and take a moment of silence for an endangered species: Thanksgivingus animatis specialus. We will not review the material from our previous class, so if you need to- you may catch up later.
As we discussed previously, in the past decade the animated holiday special has all but disappeared from Network prime time television. This would be a real tragedy if not for concurring events and technology, namely cable and satellite television and DVDs. Walk into any 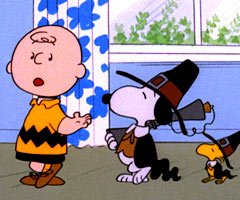 Best Buy or Circuit City, etc. and you will see many holiday DVDs; movies and animated shows alike. In recent years, the networks have sniffed the ad revenue in the air again and perhaps have realized that there is indeed something to running those specials. In fact, ABC has taken a bit of a lead in running the classics. ABC secured the rights to air the Peanuts holiday specials, taking them from CBS, the long time champ of the holiday special. Peanuts ruled CBS for 35 years. What kid doesn't remember the CBS eye logo spinning around with the dramatic music surging underneath telling us another holiday special was next?
CBS was smarting when ABC took the rug out from under them. The specials were getting perfunctory attention at CBS- ABC took the initiative and invested advertising and commercials in the series and it looks like it has paid off. At first they claimed that ratings was not a big deal; the network claimed at the time that they "won't miss the ratings. They were pretty modest. It's a matter of tradition."
That was then. Now the ratings have turned around to ABC's favor in regard to their investment. Now they are taking another step in the right direction. This year ABC is also running a longtime fan favorite Santa Claus is Comin' to Town. This is perhaps the first time in many years it has been run in primetime on a major network. ABC is also running two Charlie Brown Christmas specials (there are actually three) and The Grinch as well. CBS still has the rights to several Rankin Bass specials, Rudolph and several Frosty specials and will be airing those (Rudolph runs twice!). For many years the original Charlie Brown, Rudolph, and Frosty were the only specials you saw on network television- and they were rarely aired on the weekend. You had to go to cable to see anything else. That is beginning to change. The original fans of these shows are now adults and have or are starting to have kids of their own. They want to share these (and see them also) with their own children. Something that became tradition, then went away, seems to be making a comeback - at least where Christmas is concerned.
What does this mean for Thanksgiving specials? Well, not much- at least not in the present. The 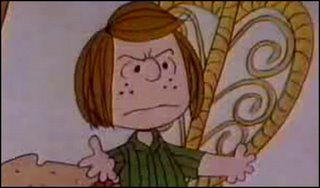 truth is that Thanksgiving specials were never in great abundance. Thanksgiving day has been the official start of Christmas programming for television right after the Macy's parade has gone off the air. I mean if Macy's winds up with Santa Claus as a finale- who are the networks to delay the inevitable. ABC, in a bold move (students, please not the light air of sarcasm in this statement) is airing A Charlie Brown Thanksgiving on the night of Thanksgiving. This year that seems to be it. However, in the 70s and 80s in the weeks before Thanksgiving, families were able to sit down in front of a least a couple of animated Thanksgiving specials. Very few of them retained a special place as a must see special- but there have been more than you think. Today, in honor of this most rare of species we will list out the Thanksgiving animated specials that have appeared over the years, many which have been largely forgotten (some deservedly so). A few deserve to be remembered and seen still. Perhaps you will enjoy this trip down memory lane. Take the time to watch the specials when they air, and perhaps the trend that is returning, starting with Christmas, will spill over to Thanksgiving as well.

The Mouse and the Mayflower (Rankin Bass, 1968)
If you thought the masters of the holiday special missed Thanksgiving, you are wrong. Rankin Bass hit Thanksgiving hard like your Aunt Mabel's Turkey Tofu Loaf. This cell animated adventure is about a Mouse that takes a trip along with the pilgrims aboard the Mayflower and ends up saving the ship and eventually Thanksgiving. Natch. Rankin Bassaficionadoss (including yours truly) eagerly await the DVD release of this classic. You can find it only used on VHS if you can't wait.

The Thanksgiving That Almost Wasn't (Hanna Barbara, 1972) This was a fairly saccharine-sweet adventure style cartoon. A young settler befriends a young Indian around the time of the first Thanksgiving. Some forest animals of the Snow White variety hang out with them, until they are dangerously cornered by a bear. Who will save the day? I actually don't remember this from childhood, but from having seen it on Cartoon Network about seven years ago.

Bugs Bunny Thanksgiving Diet (Warner Brothers, 1979) Bugs Bunny is the head of a diet clinic helping out other Looney Tunes characters with food related problems. Each problem transitions into a classic cartoon with a food theme. This one is actually funny and the new animation does a better job of leading into older segments. Although not on prime time anymore, you can probably find this on VHS at a rental store or online.

Daffy Duck's Thanks For Giving (Warner Brothers, 1980)
This is really only a Thanksgiving special in name only. Classic Daffy Duck shorts are joined by new animated transitions which have Daffy trying to get "J.L" to produce a new Daffy Duck film adventure: "Duck Dodgers and the Return of the 24th 1/2 Century."

This is America, Charlie Brown - The Mayflower Voyagers

(Paramount, 1988) While is not necessarily a "Thanksgiving special" it is an enjoyable and fairly informative look at the story of the meeting of the Pilgrims and Native Americans. Part of the "This is America" series, this special is available as a second feature on the Charlie Brown Thanksgiving DVD.

Garfield's Thanksgiving (Fox, 1988)
A great classic! Garfield's vet tells Jon that Garfield must go on a diet, right at Thanksgiving. Jon is able to convince the lady vet to come over for Thanksgiving. When she comes over, she takes pity on ol' Garfield and tells him he can take a break from the diet for the special diet. Jon almost ruins dinner, but luckily it's his Harley- riding Grandma to the rescue. This one is readily available on the Garfield Holiday Celebrations DVD.

And of course perennialnnel classic:

A Charlie Brown Thanksgiving (Paramont, 1973)
What else can we say, other than perhaps no other special is able to top it. Peppermint Patty invites herself, Franklin, and Marcie over to Chuck's for Thanksgiving. One problem - Charlie Brown and Sally are headed to Grandma's for dinner and aren't cooking. Linus recommends that perhaps they have two dinners: one for the gang early and then the Browns can head to Grandma's. Snoopy handles cooking duties which includes Jelly Beans, toast, popcorn, pretzels and sundaes. Peppermint Patty gets pretty ticked and freaks out. Marcie reminds her that she invited herself over and PP apologizes to Chuck. Then Charlie Brown does what he should have done in the first place: he asks Grandma if his friends can come for dinner. When the gang heads for Grandma's condo, Snoopy and Woodstock then pull out the real Thanksgiving food that he hid for themselves. Woodstock, who apparently has no issues with cannibalism, wins the wishbone. I love this special- it's actually one of my favorite Charlie Brown specials. Also it has a very under-appreciated song: "Little Birdy." Love it. Do yourself a favor - watch it Thanksgiving night.


Well Shelfers- that's the case for Thanksgiving we think it deserves all the respect we can give it. Hopefully animated specials will continue the trend and return in abundance soon. Until then, enjoy them on DVD or cable if you can.

Finally from all of us at The Shelf- Happy Thanksgiving! Snag a drumstick and an extra helping of pie for us and enjoy Charlie Brown tonight! Be safe-

What did you expect, a turkey card?

1.Ron Howard was in American Graffiti with Charles Martin Smith.
2.Smith was in Pat Garrett & Billy the Kid with Jason Robards
3.Robards was in How the West Was Won with John Wayne
4.Wayne was in The Quiet Man with Maureen O' Hara
AND
5.O'Hara was in Sinbad the Sailor with Douglas Fairbanks, Jr.
In the words of Stewie Griffin: "A-Ha!"

Very creative Brewjoe- How the West Was Won is kind of a "hub" for six degrees movie games.
However, I can link them in three movies. We typically give a week for the game- will reveal our answer by Thursday. Hint- it involves a minor character in the Thin Man series.

Alright, since no one has jumped except brewjoe we'll reveal our original answer-
Ron Howard was in The Shootist with Jimmy Stewart
Jimmy Stewart was in Winchester '73 with character actor Abner Biberman
and Biberman was in Gunga Din with Douglas Fairbanks, Jr.
(Biberman was the son of the leader of the bad guys in Gunga Din)
which I guess you could also play off brewjoe a bit-
RH was in The Shootist with John Wayne
JW was in McClintock with Maureen O'Hara
MO was in Sinbad the Sailor with Fairbanks.