hell on a beach 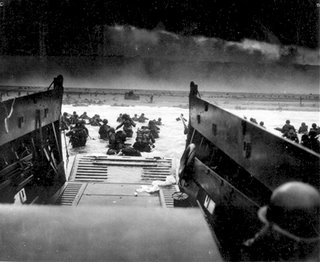 It's been an early morning today, Shelfers. I saw Mrs. Loophole off on plane this AM while the chickens were still fast asleep. She is headed to visit her siblings and mother for a week or so. After I got home from the airport, I decided to check the morning TV news, something I do not normally do. And to my (not really) surprise, I could not find in an hours time and at least ten channels- not a single word about D-Day. I guess I kind of expected it, what with WW II out of vogue with most of the newsmedia when it comes to hard won, hard fought success. What was on everyone's lips was the date itself: 6-6-06. Yes, everyone with a microphone was exclaiming how superstitious we are...silly Americans! Yet at the same time- I don't see too many people out buying bread and holy water. Most of the people I have talked to this morning did not realize it, or wouldn't have unless the news reader hadn't mentioned it on their radio station's "Morning Zoo!" All I see is Hollywood trying to talk it up to promote a silly remake and a small town in Michigan trying to take advantage of the one time in a century when they get some media exposure.

What isn't being mentioned as much is what I once read as described as "hell on a beach": D-Day. On this day, are we thinking about the heroes who gave their true last full measure? Have you read anything about it lately? There are numerous books out there, as well as various web sites with good information to tell the tale of that morning of June 6, 1944. Please go and pursue read that material, but for now I want you to think about the following: 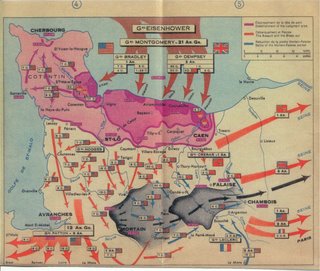 Allies knew they would have to conduct an invasion of France and press on to Berlin from the West in order to defeat the Germans. Normandy became the most likely location for the invasion in 1943, and later that year the plan for Operation Overlord was submitted to Allied leaders and approved. The men (and women who may have not been on the front lines, but served in vital areas nonetheless) trained for almost a year prior to the invasion. Since 75% of the invasion forces would be American, the Allies choose as leader of the operation, General Dwight D. Eisenhower.

Eisenhower was a soft spoken man in many ways, never truly given to the political aspect of pushing your military career. He was an organizer, a admirer of the military man, and a natural leader- one who had genuine affection for the men fighting for freedom. Once when visiting with the men before that fateful June day he asked if any of the soldiers were from Kansas. When one soldier raised his hand, Eisenhower replied, "Go get 'em Kansas." He was like that with the men. He was also committed to what needed to happen. Once the course was decided, there was no turning back. And if the invasion was a failure, he also knew that he would take a huge portion of the blame. It wasn't the blame from the press or the political leaders that worried him- he was more concerned with the mothers and fathers and sisters and brothers and sweethearts and children back home who not only desperately wanted the boys to come home alive, but also wanted them to succeed. Aided on the British side by General Sir Bernard Law Montgomery, who commanded the ground troops, and Admiral Sir Bertram Ramsay who commanded naval operations, these three men became the leadership of an invasion that would have little equal in the annals of history. The last word, to go, would remain with Gen. Eisenhower.

The boys themselves knew that many of them would not make it, that despite their training some of them would not set foot on the beach. And those that made it to the beach, may just be buried on it's shores. The boys of D-Day knew what could happen, yet they also knew that it had to be done. The allies knew that the Germans had heavy guns there, and had had time to build up defenses against both an aerial and naval assault. Therefore, both had to occur. The night of 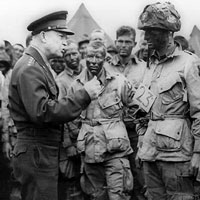 June 5 Allied paratroopers were dropped behind enemy lines to try and weaken those defenses and take out some of those guns. If you have read Band of Brothers or seen the mini-series then you know a little of what I'm describing. Many of the guys didn't make it, some units lost almost all of their men. Those surviving units completed their missions and survived because of their comrades and the men who emerged from the ranks as natural leaders to take the place of the fallen.

These boys...these men who gave their all were previously neighbors. Sons. Brothers Husbands. Students. Teachers. Ball players. Butchers. Milkmen. Farmers. Accountants. Shop clerks. Builders. Trash men. They were, in short, the people we knew. And they were the best of us. They were Americans; raised in a country of freedom, hardened during a time a depression, and conditioned to defeat a terrible foe with terrible means. They knew what had to be done. The people back home knew what had to be done. Everyone knew that it came with a price. These men of D-Day paid that price.
Think about that. They knew the cost, and they paid it. Don't we need to remember that and cherish it? Don't we need to thank them for that? What strikes me today is that everytime I talk to a friend, a soldier who is just home from Iraq and Afghanistan is that fact that they also know what is at stake and that the freedom for our futures and for the future of others exacts a price. As the cliche goes, and is true as most cliches are, freedom is not free. The sooner we remember that... the sooner we remember the true value of it, the better off we will be.
Before the men of D-Day left for their missions, General Eisenhower issued his "Order of the Day" to the "Sailors, Soldiers, and Airmen of the Allied Expeditionary Force!" I think to close out today, I would like to quote that extraordinary "letter" to his men, the men of D-Day: 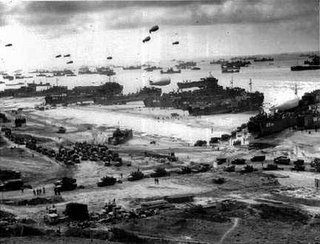 You are about to embark upon the Great Crusade, toward which we have striven these many months. The eyes of the world are upon you. The hope and prayers of liberty-loving people everywhere march with you. In company with our brave Allies and brothers-in-arms on other Fronts, you will bring about the destruction of the German war machine, the elimination of Nazi tyranny over the oppressed peoples of Europe, and security for ourselves in a free world.

Your task will not be an easy one. Your enemy is will trained, well equipped and battle-hardened. He will fight savagely.

But this is the year 1944! Much has happened since the Nazi triumphs of 1940-41. The United Nations have inflicted upon the Germans great defeats, in open battle, man-to-man. Our air offensive has seriously reduced their strength in the air and their capacity to wage war on the ground. Our Home Fronts have given us an overwhelming superiority in weapons and munitions of war, and placed at our disposal great reserves of trained fighting men. The tide has turned! The free men of the world are marching together to Victory!

I have full confidence in your courage, devotion to duty and skill in battle. We will accept nothing less than full Victory!

Good luck! And let us beseech the blessing of Almighty God upon this great and noble undertaking.

On behalf of Wolf and myself I would like to say thank you. Thank you, men and women of D-Day. Thank you for your sacrifice. Thank you to those fought and survived and those fought and lay down their lives for me and my family. Thank you to those at home who sacrificed much of their daily comforts to fight the war. And thank you to the families of the fallen- your sacrifice is sacred beyond measure. This American will not forget and will always cherish the courage, devotion to duty, and the freedom for which you fought.
And to our men and women overseas who fight today for our freedoms- Thank you and to quote General Eisenhower, "Go get 'em."

I treasure my remark to a grandson who asked, "Grandpa, were you a hero in the war?" "No", I answered, "But I served in a company of heroes".

Email ThisBlogThis!Share to TwitterShare to FacebookShare to Pinterest
Labels: D-Day

Thank you for this wonderful reminder... my dad was in WW II, but not at D-Day. He was one of the reinforcements that came in during the weeks after. He was in the push to Berlin. Its very humbling to know what our fathers and grandfathers did. Its also very frustrating to see with what disdain some people have for the freedom that they fought so hard for. Thank you again for one of the best articles I've read in a while

Fantastic post! I was checking out all the news sites and commentary and found only one or two even mentioned D-Day! It should be declared a national day of rememberance. After I read Mr. Loophole's post an hour or so later I found others- many of them apologizing for not realizing or remembering today was D-Day. I guess they read the Shelf and were quickly reminded. Thanks for reminding all of us.