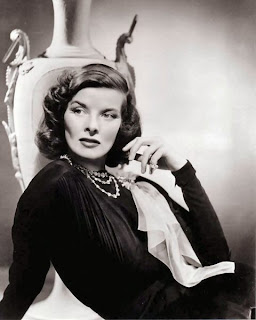 Today would have been Katharine Hepburn's 100th birthday. We can't think of any better way to celebrate the 100th of one of our favorite actresses than by watching some great Hepburn flicks! So, we'll recommend a typical Shelf top ten (11) list for your viewing pleasure!

11. Rooster Cogburn
What better way to remember the Duke and Kate than by watching their costarring western classic? Rooster Cogburn, the old crotchety Marshall from True Grit unwillingly brings Eula Goodnight (Kate) along to hunt down her father's killers. Kate loved working with talent, and she respected the Duke almost as much as she respected Spencer Tracy. That's saying alot.

10. Guess Who's Coming to Dinner?
This is the last pairing of Tracy and Hepburn on film. Spencer's health was bad during the filming of this classic, but he never let on. Kate said he never complained, but was proud that he did one more performance. Kate's performance in the film is understated, but firm and eloquent.

9. Holiday
Another pairing with another frequent co-star, Cary Grant. Kate plays the older sister of Grant's fiance. When Grant comes to meet the family for the first time, he finds that perhaps Hepburn is more suited to his carefree mentality and attitude, than the button-down rigidity of his fiance and her father.

8. The Lion in Winter
Kate is extraordinary as Eleanor of Aquitaine, Queen of England. Her husband, the King Henry II (played by Peter O'Toole) needs to commit to an heir. He calls Eleanor and their sons to a "family" holiday for Christmas, where he plans to name his successor. However everyone has their own schemes and designs for who that should be. Side note: This was Timothy Dalton's first film and Anthony Hopkins's second. 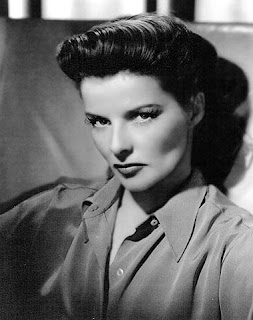 7. Desk Set
One of many great Tracy/ Hepburn flicks. Kate plays Bunny Watson, manager of a research department for a television network. Spencer Tracy plays Richard Sumner, who comes in one day to study and observe her office and staff. Bunny and Richard are headed for romance, but her boyfriend with perpetual cold feet, and her suspicion that Richard is going to replace them all with a computer gets in the way.

6. Pat and Mike
Do you get the feeling that I love Tracy and Hepburn films? You should. This is a hilarious film that stars Kate as Patricia "Pat" Pemberton an amateur sportswomen who is convinced by agent Mike Conovan to go pro. Mike is a little shady, and is connected to even shadier characters, but he seems to have met his match in Pat. I think this is their funniest film, and you especially don't want to miss the scene when Pat saves Mike from those shady characters. Side note: One of those shady characters is played by a young Charles Buchinski, better known as Charles Bronson.

5. Bringing Up Baby
Cary Grant is back in this great screwball comedy classic directed by Howard Hawks. To even begin to explain it defeats the purpose. Let's just say, Tracy is a screwball heiress, Susan Vance and Cary Grant plays stiff paleontologist, Dr. David Huxley. She falls for him and a pet Leopard is involved. You just have to see it. If you haven't Warner's released a dandy two disc special edition several years ago. 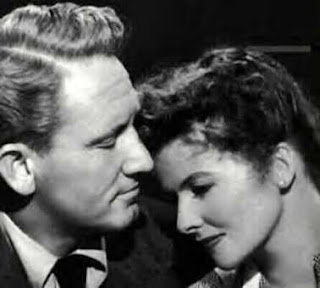 4. Women of the Year
This is the first film that partnered Spencer Tracy and Katharine Hepburn. It is an odd mix of comedy, romance, drama, and pontification on the politics and relationships of the sexes. No nonsense Sports writer Sam Craig (Tracy) falls in love with sophisticated columnist and "modern woman", Tess Harding. Although the feeling is mutual, it appears that Tess and Sam's ideas of a relationship and marriage are at odds. A very poignant film.

3. Adam's Rib
This is perhaps my favorite Tracy/Hepburn flick. They play a married couple who are both attorneys and find themselves on opposites sides of an attempted murder case. This all-time classic was written by the incomparable team and married couple of Ruth Gordon and Garson Kanin. It was directed by frequent Hepburn collaborator George Cukor.

2. The African Queen
As I have said before, it is a crime that this film is not available on a special edition DVD. Bogie and Hepburn are together for a unconventional wartime romance in Africa. Filmed on location and directed by John Huston, this movie got Bogie his only Oscar win. It's a damn shame that this is the only film on this list that's not available on DVD. Fortunately, TCM is there for us, as it was shown today.

1. The Philadelphia Story
This is one of my favorite Katharine Hepburn films of all time, and it was the comeback film for Hepburn's career. Ironically, our number 9 film, Holiday, was her last film for a couple of years. She had been deemed box-office poison after a string of films performed poorly at the box-office, and due to her prickly relationship with the press. After Holiday, Kate went back to the Theater where she performed to rave reviews as the star of the play, The Philadelphia Story. Desiring a comeback and a comeback on her terms, Kate bought the film rights to the play, and once it was a hit, she had leverage in negotiation terms. She got a new contract with MGM and picked the director, George Cukor, for the film. Co-starring Cary Grant and James Stewart, The Philadelphia Story was a huge hit and was nominated for six Academy Awards, including Best Picture and Best Actress. It won two Oscars; for Best Screenplay and Best Actor for James Stewart. Kate had her comeback in a big way, and it was two years later when she would meet and work with Spencer Tracy. This 1940 gem is a must see film, and if you haven't had the chance, Warner's released a great two disc special edition a couple of years ago. 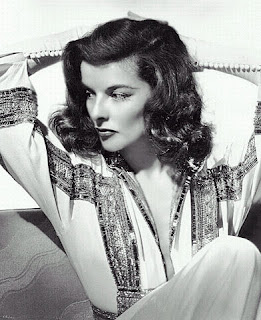 Kate holds the record for most Academy Award wins; 4 out of 12 nominations, and her storied career lasted for almost 70 years. Amazing and talented, she is one of Hollywood's best known and best loved actresses. She landed roles and held sway in films as strong and independent women, years before modern actresses began to complain that their weren't any in films. She set the standard and she set the bar high. So celebrate her 100th in style with a film or two off our list. And as a great companion, read her books: Me: Stories of My Life and The Making of "the African Queen": Or how I Went to Africa with Bogart, Bacall and Almost Lost My Life (this one is out of print- try the library). Enjoy the films and we'll see you back here at The Shelf. Same Shelf time, same Shelf channel.

The time to make up your mind about people is never.

You forgot one of my favorite Katherine Hepburn films: On Golden Pond. I read somewhere she was having trouble connecting with Henry Fonda, and she brought in Spencer Tracy's fishing hat for Fonda to wear. He was so touched, he wore it throughout the movie.

Great list. I'd also add Alice Adams, although I don't know what I would remove from the list. I haven't seen it in a long time, but it was a delightful film with the always enertaining Fred McMurray. Having seen you preview the Katherine Hepburn set in the previous post, I went ahead and preordered it at amazon, and was surprised to find that Alice Adams is also available on DVD! Which I promptly ordered. Thanks for the previews.

Great list! I'd include Alice Adams over Rooster Coghburn, but to each his own... ;)

Great blog.
(Thanks to the Katharine Hepburn Project for redirecting me here.)

But how on Earth could you fail to mention SUMMERTIME?
If you think it's fluff, think again. ;)