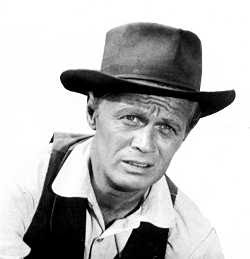 Veteran actor Richard Widmark has passed away at the age of 93, according to news sources. The tough guy image he carried with him saw him through countless westerns, crime and film noir films. His debut film was partly responsible for this initial image- it was a breakout role as a sadistic hit man in the film noir classic, Kiss of Death. He was an instant hit, and was nominated for an Oscar. He laughed as he killed his victim, sending chills up the spine. He later said of the role; "That damned laugh of mine! For two years after that picture, you couldn't get me to smile. I played the part the way I did because the script struck me as funny and the part I played made me laugh. The guy was such a ridiculous beast."

My favorite Widmark films are Broken Lance with Spencer Tracy and the great Sam Fuller flick, Pickup on South Street. Pickup also featured a fantastic perfomance from actress Thelma Ritter. Widmark also starred in John Wayne's The Alamo, although the two didn't always get along during filming. You can read some very nice tributes to Widmark at Laura's Miscellaneous Musings and at Libertas.

Sometimes you look for oil, you hit a gusher.