Here is a repost from last year. Being the 64th Anniversary of that moment when the whole world held it's breath, we wanted to bring this well received piece from last year's recognition of D-Day. We never tire of thanking the vets- and all whose sacrifices were made during that time. So if you will indulge us- Please feel free to comment below. 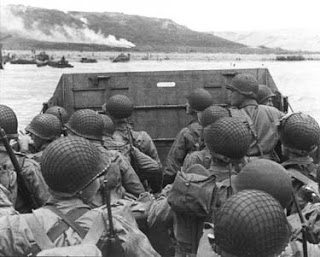 Today marks the 63rd anniversary (editor's very obvious note: 64th this year!) of the launch of the Allied force's invasion of continental Europe, starting with German-occupied Normandy. The invasion of Normandy was dubbed Operation Overlord, but it is remembered as D-Day. On that single day there were more casualties than we have suffered in the entire War on Terror. Then, as now, heroes gave their all for all of us, and for people across an ocean they did not know. Let us not forget.
Last year, I wrote an article about D-Day. I link to it here, but I also want to quote a part of that post:

These boys...these men who gave their all were previously neighbors. Sons. Brothers Husbands. Students. Teachers. Ball players. Butchers. Milkmen. Farmers. Accountants. Shop clerks. Builders. Trash men. They were, in short, the people we knew. And they were the best of us. They were Americans; raised in a country of freedom, hardened during a time a depression, and conditioned to defeat a terrible foe with terrible means. They knew what had to be done. The people back home knew what had to be done. Everyone knew that it came with a price. These men of D-Day paid that price.
Think about that. They knew the cost, and they paid it. Don't we need to remember that and cherish it? Don't we need to thank them for that? What strikes me today is that every time I talk to a friend, a soldier who is just home from Iraq and Afghanistan is that fact that they also know what is at stake and that the freedom for our futures and for the future of others exacts a price. As the cliche goes, and is true as most cliches are, freedom is not free. The sooner we remember that... the sooner we remember the true value of it, the better off we will be.

I want to also share a couple of videos. One is a segment from a documentary entitled Voices of the Veterans. The men being interviewed were from a town in Virginia that lost more men per capita that day than any other town in America.They were in the very first wave.

The second video is an episode from a History Channel documentary entitled: D-Day June 6th, 1944: The Total Story. The documentary was narrated by Gerald McRaney and debuted in June of 1994, on the 50th Anniversary.

I offer a thank you to all of the families who lost someone that day. Thank you for your sacrifice. It is not forgotten. A prayer of gratitude to those men who went into that day, scared and unsure, but going into the breech nonetheless. And a thank you to any veterans of D-Day and World War II. We are lucky and grateful that you are with us. May we learn from you and always treasure the freedom you fought for. I know it may not seem like many do if you watch the news, but so many untold millions are grateful. And lastly, thank you to my Grandfather. Your example will always be a guiding force in my life.

Let us beseech the blessing of Almighty God upon this great and noble undertaking.

Email ThisBlogThis!Share to TwitterShare to FacebookShare to Pinterest
Labels: D-Day