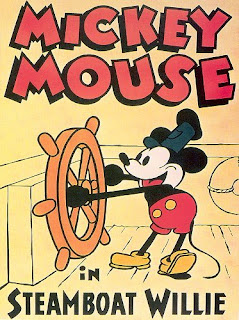 On November 18, 1928, the final sound version of Steamboat Willie was released and debuted at New York's 79th Street Theatre. Walt Disney and Ub Iwerks created this animated parody of Buster Keaton's Steamboat Bill, Jr. using Walt's new character Mickey Mouse, created after losing the rights to Oswald the Lucky Rabbit. It was one of the first cartoons (and perhaps the most successful at the time) to incorporate a post-produced soundtrack of music, dialogue, and sound effects. Although several other shorts were made previously, Steamboat Willie was the first Mickey Mouse cartoon to hit wide release. It was a smash and a star, indeed, an American Icon was born. More info here and here.

To celebrate how about a ride on Steamboat Willie? To do so properly, with all it's charm and remastered glory, make sure you pick up Walt Disney Treasures: Mickey Mouse in Black and White.

I hope we'll never lose sight of one thing--that it was all started by a mouse.

Ooh I want Walt Disney Treasures - Mickey Mouse in Black and White! I have vol. 2 though. I think I remember hearing somewhere that Walt voiced the parrot (although I still can't understand what he's saying!).

Yep- you are correct Ladytink (of course!) Walt did voice the parrot and Mickey and Minnie.
I actually am a WD Treasures fanatic- I have almost all of them and am pleased to say the cartoons look wonderful. Leonard Maltin and Disney did and continue to do a fantastic job on the series.
PS- the 2008 wave of WD Treasures were released last week- including The Chronological Donald Duck Vol. 4- the last in that series! Highly recommended!

I have a few but not nearly enough! I know about the new ones and I'll be getting a few over the next two months since Dec. 20 is my birthday, Christmas of course, and January 4 is my wedding anniversary lol.