when you wish upon a star... 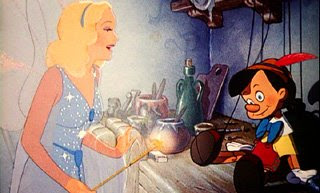 This week sees the 70th Anniversary release of the DVD Platinum edition of Walt Disney's follow up to Snow White: Pinocchio. If you have the previous incarnations of 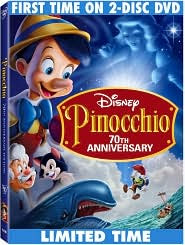 this film on VHS or DVD, you might think- Why bother? If you are a Disney-phile, you are thinking: I hope they did it right this time, and where can I pick it up. The one thing that Disney has understood for many years is the value of it's history and the endless recycling of it's product. From rereleasing it's films in theaters on a rotating basis to the creation of the mysterious "Disney Vault", fans have had many opportunities to see these films. In recent years with the refinement of DVD, the internet and Blu-Ray more Disney films have been including more features and behind the scenes material, etc. And this newest re-release of Pinocchio is no exception.

Whether you are merely a fan of the parks, or maybe the animation or even like me - an all- 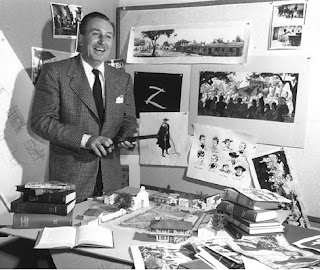 around Disney fan, you probably have a collection of DVDs or books and are interested in the various aspects of Walt Disney's imagination come to life.(I recently finished a recent book on the creation and building of Walt Disney World called Realityland, which I do recommend for a well balanced portrait of the realities of running WDW) I love reading everything on the parks, the animation, live action films and especially the man himself. However the Disney corporate office itself has had a mixed history in understanding the heritage and the love that fans have for it and Walt's legacy. I have found that that has changed in recent years, at least in the support of the archival output- everything from the Walt Disney Treasures series on DVD to now some material showing up on the web.

So when I found this Disney run site, D23, I was somewhat skeptical but encouraged that there would be some good stuff. Billing itself as "The 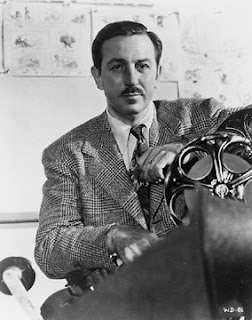 Official Community for Disney Fans", D23 is a website, a quarterly publication and fan community. Why "D23"? It references the founding year of Disney's studio: 1923. The focus seems to be on the dedicated fan looking for archival information, behind the scenes look and nostalgic material. The is even a print edition that will be available every quarter (including at Barnes and Noble stores). The site seems to be is available to everyone, but there is a charter membership available, but you can check that out on the site yourself. My favorite aspect so far is the Archive page with historic material and articles, but also a daily page of old Disney comic strips including Mickey Mouse, Donald Duck (my fave) and Scamp (Lady and the Tramp). The scans aren't the greatest quality, but hopefully will improve. Also fun is the link to clips and videos of classic cartoons and behind the scenes videos. All in all it's a cool site and gives a Disney-phile like myself more material to enjoy. Check it out- it's being added to the Shelf Links list, and you might want to put it on your favorites as well. Oh- and don't forget to pick up Pinocchio if you haven't already.

Also: Here is an article from Jim Hill Media about the launch of D23- honestly, I didn't realize that the launch was a big media event. Apparently there was and while some critics are complaining that this is yet another Disney method to wring money out of fans, the website has the backing of everyone from Bob Iger and corporate to the actually dyed in the wool Disney Legends like Dave Smith (legendary historian and archivist - who knew they could be legendary) to Marty Sklar (legendary Imagineer) and John Lasseter (head of Disney and Pixar animation studios). Hmmm- am I out of the loop or ahead of the curve? Who cares? Check it out.