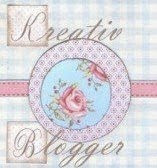 I received word today that this humble little blog has received the Kreativ Blogger Award our pal (don't hold that against him) over at Thrilling Days of Yesteryear, Ivan G. (the "G" stands for goin' places) Shreve, Jr. Ivan, erstwhile curmudgeonly classic culture commentator that he is, bestowed upon us this nice award- the first in Shelf history. We were further honored when we saw the august company we kept- as Ivan bestowed it upon several other blogs that we admire and love. On behalf of the trained professional staff here at The Shelf- oh, and the authors too- I thank you Ivan for being so kind.
Now it says here in the official handbook that there are several duties to which we must attend. Here they are in order:
1. Thank the person who nominated you for this award. - Again, thanks Ivan!

2. Copy the logo and place it on your blog. Already proudly displayed above.

3. Link to the person who nominated you for this award. Here ya go.

4. Name 7 things about yourself that people might find interesting.
Well, I'll speak for myself- Matt, Wolfie and Mrs. Baravelli can chime in on their own.
a. I had been known, on occasion, to enjoy a jar of Gerber Plum baby food when I was feeding my own brood. I was pretty sure they didn't mind. The banana suited them better.
b. Outside of family, I have considered Groucho Marx, Moe, Larry, Curly and Shemp and Humphrey Bogart to be my personal heroes since the age of 8.
c. My favorite comedian and star of all time is Jack Benny. It is my lifework to listen to all of his radio shows. It doesn't pay well, but it's a living.
d. If forced at gunpoint, I believe I would choose Dino over old Blue Eyes to play on the vitrolla.
e. I am working on a book. Seriously. On the long term plan. Just don't ask me what the title is, because I haven't decided.
f. I have an unusual affinity for television theme songs. I have Sanford and Son, Night Court, Barney Miller, Friends, Newhart and Cheers on what passes for my mp3 player. (By the way-You can hear the full version of Sanford and Son here.)
g. When in High School I formed a comedy club that actually spread to two other schools, and we were known for two things: 1. A prank advertising the High School Building for sell in our local newspaper (they got a few calls) and 2. Having our own Monty Python "cover" troup. Once we performed the Lumberjack song at a community fundraiser held at a friend's Unitarian Church. Believe it or not, Unitarians have a wicked sense of humor.

5. Nominate 7 Kreativ Bloggers and post links to the 7 blogs you nominate.
Well, Ivan has nominated several that we would as well, but we have more that we think are well worth a daily read, and are quite keen to boot.
A. Jacqueline at Another Old Movie Blog.
B. Moira at Skeins of Thought.
C. C.K. Dexter Haven at Hollywood Dreamland
D. Livius at Riding the High Country.
E. Bacall at Classic Movie Gab.
F. Raquelle at Out of the Past.
G. Operator_99 at Allure
6. There is no number 6- it says here.

7. Leave a comment on each of the blogs letting them know they have been nominated.

Well, we have fulfilled our award winning duties and again, we would like to thank Ivan for this honor. And we encourage you to go visit the nominated blogs we've listed. We do think they are the bee's knees.

Let joy be unconfined. Let there be dancing in the streets, drinking in the saloons, and necking in the parlor.

Wow! Thank you so much for the recognition.

Thank you, J.C. I'm honored as all heck. I also love all the other blogs you mentioned, so finding new members of this cozy little club is going to be a challenge, but a happy one, I expect. Thanks so much again.

Thanks very much for this - very flattering indeed to be listed among an extremely cool selection of blogs.

Thank you J.C. Now I have to find more creativity...where did I put that? Maybe it's under "K"?? I really appreciate your generosity.

All of you have awesome blogs and are weekly, if not daily, reads (I know I don't update that often!) for me- thank all of you for making me want to be better and proud for being a part of this great classic film fan conglomerate that is on these here interwebs! If I had known in High School there were more out there I wouldn't have felt like the lone wolf!