salute to our fallen 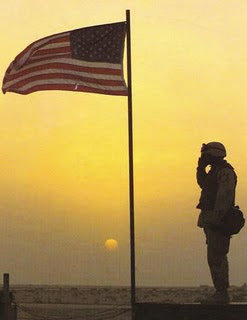 As we enjoy the rest of this Memorial Day weekend, please enjoy this repost of one of our most requested and commented-on posts from the past few years by our very own Wolf Flywheel. Also, please remember the reason behind this day and take a moment to reflect and pray for the fallen and their families. And thank a soldier and their families for their current service.


As we fire up the grills today and enjoy family and friends I challenge us all to remember those for whom this day began. For centuries man has engaged in battle. Since time began there has always been a group somewhere who took up arms to defend their own or others who could not do so for themselves. Today we remember those who undertook this duty for our nation, but did not live to return home. I am not ashamed to say that as Americans, we live in the greatest nation on this green earth. God smiles on this country and those who feel otherwise can go jump in a lake.
The Declaration of Independence and Constitution alike are documents inspired of God and we live under the protection of their great canopy today. Lets take today to enjoy our freedoms and remember those who stand watch and hoist that canopy for us.

There is the famous phrase "All gave some and some gave all..". We hear it now and then and most of us pay little attention. Today is the day we remember those who gave all. My grandfather fought in and was wounded in the invasion of Italy in WWII. He is with us today because our family is greatly blessed. There are those who fought alongside him who never made it back to their families. I once heard him talk about the horrors of war saying that since returning home he has thought "Why did I survive? Why is it that when I was injured that I came out OK yet there were so many others who never made it past 19 or 21 years of age and returned home dead." He told me once that he had a great friend in his unit from Tennessee. He said they fought together in North Africa and into Italy. After he was wounded, he was taken to a field hospital and then to Charleston, S.C. to recover. Once he had gained his bearings in Charleston, he says he went to great lengths to check on the status of his friend who

was still fighting overseas. In the process of doing so, he discovered to his horror that his unit had gone on to spearhead an attack on a city held by the Nazis and was almost completely wiped out. The list of casualties included his friend. This caused him to wonder why he survived and why he wasn't dead with his friend. I know he is grateful that he is here with us today, but I understand why he has had concern in the past.

There are those who have gone on before who died for the cause of our freedom or for the freedom of another. I don't care what your politics are. Whether it's our freedom or the freedom of some other nation, it is still freedom. People say that our soldier are dying for nothing in Iraq, but I say that disrespects the fallen who went out and put their life on the line for the freedom of another. No soldier ever died for nothing as long as they believed in the cause for which they fought. Let us put partisan views aside today and remember those who will never make it home. For the sake of their memory and the honor of their families, let us join together this day in a moment of silence to remember those who have fallen. I know we've all seen this video clip of the soldier returning from Iraq and surprising his son. As a father of two boys, I know what it is to enjoy the love of your children. In my career I have had several instances where I thought that I might not have made it home to see them again. Luckily I'm still with my family, but as we watch this clip today, let's think of what it is like for all of those little boys and girls past and present who won't get to hug mommy or daddy again. Let's think that even though our soldiers fight for freedom right now in another country, they still fight and die for freedom. Let's honor them for their courage and sacrifice and let's think about what it means when we hear "some gave all".

Please feel free to comment if the need strikes you.

"War is an ugly thing, but not the ugliest of things. The decayed and degraded state of moral and patriotic feeling which thinks that nothing is worth war is much worse. The person who has nothing for which he is willing to fight, nothing which is more important than his own personal safety, is a miserable creature and has no chance of being free unless made and kept so by the exertions of better men than himself. ."