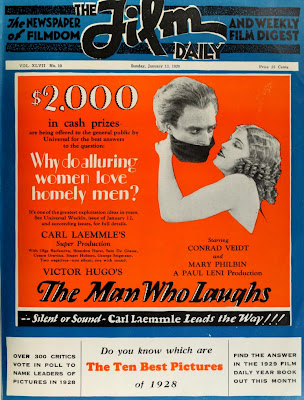 When Leonard Maltin announces something or gives a heads up on something new in the field of hollywood and film history or research, I tend to perk up and listen. I, like many others, have read Mr. Maltin's books and followed his website for sometime, and while the reviews are great, I'm there for the history, the interviews and the Disney stuff. So when he and fellow animation historian Jerry Beck (on his awesome site, Cartoon Brew), both featured articles about some newly digitized archival material this week, I listened (or read as the case may be) and checked it out.

You may recall last year we discussed a major conservation project and preserving historical printed material related to film, called Media History Digital Library, and is headed by archivist and film scholar David Pierce. Last year Pierce had included some issues of Motion Picture Classic, Photoplay and Moving Picture World. Now Pierce has updated the collection to include a set of issues of The Film Daily, from 1922-1929. 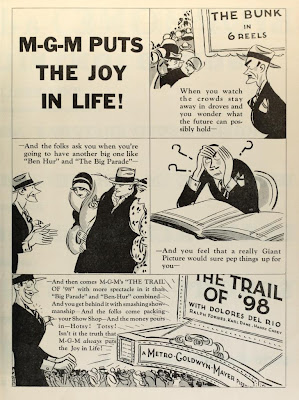 Why is this important? Well to classic film buffs it's interesting to browse and look at the vintage ads (like above) and read reviews. To cultural historians like myself, it is a dream come true to be able to access this printed material without having to spend the money and time to track down and visit various library holdings of these collections, some of which are a continent away. This run of the Film Daily is particularly interesting because it documents the transition from silent to sound in an interesting way. This isn't a historian giving you the story of that transition; you can read and see it as it happened. (One of many examples, this article covering RCA's historic aquisition of Victor Talking Machine Co, which resulted in RCA Victor. ) Also lots of first hand and primary source evidence: for example, there were a great deal of First Amendment and Censorship debates and court cases going on in several states during this time, as States sought to have the right to inspect and censor the sound films themselves before exhibition. And in addition to documentation and news, there are scores of film reviews from the era. The years 1928 and 1929 are really interesting as the silent and sound era co-existed in a wary stasis. It's not as clear cut a transition as we often we like to think. 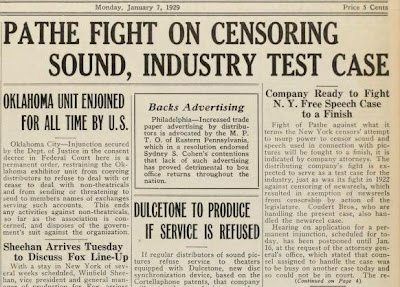 The scans are wonderful and the digital presentation remarkable. They are searchable, easy to read and browse and download as well. You can read more about the Media History Digital Library here, and please consider a donation as well, or perhaps if you have a collection of vintage printed material, contacting David Pierce to see about a contribution. Preserving our cultural heritage is vastly important. We have a rare opportunity to preserve in print, sight and sound the artifacts of our culture for future generations; not just to study, but to enjoy. Thank you Mr. Maltin and Mr. Beck for the tip and thank you Mr. Pierce for your project.

We've seen growing awareness of film preservation, yet the deterioration and eventual disappearance of films have not come to an end. There's still a race against the clock to save what we can at some point.