I have to admit that I am not one for gore or horror movies. Never have liked the nasty stuff. Call me whatever you want, but I don't really see why all that stuff is necessary. When you strip away all the special effects and naughty bits - there is not much left. No story, no real plot- nothing. Take a gander at the typical plot summary and you can enter your own details Mad Libs style. It really doesn't matter how you do- it'll still end up the same.

A _____ [A. summer camp B. movie theater C. old house D.Beverly Hills Mansion] is rumored to be_____ [ A. haunted B. the site of some grisly murders C. the former spot of a political convention D. the site of a WB sitcom] that took place_____ [A. many years ago B. last week C. November 2004 D. during the slow summer news season]. Several teenagers dare each other to ____[A. spend the night B. take a vacation there C. perform an exorcism D. dress up like White House Interns] at the old place. They have all heard the stories, but inevitably one of them will feel the need to repeat said story about who is said to haunt the area. Little do they know it, but the ____[A. former janitor B. summer camper C. U.S. Senator D. Mickey Rourke] is still alive and watching their every move. The teenagers are warned to leave by______ [A. an old codger guard B. former camp counselor C. U.S. Special Prosecutor D. Mickey Rooney], who tells them that they_____ [A. are doomed B. will never leave alive C. should not go to sleep D. are invited to Neverland for a "sleepover"].

The kids laugh off the story and the warning and go to sleep. During the night they hear_____ [ A. strange noises B. a sinister laugh C. spooky moans D. Larry King] and decide to investigate. They of course, split up and one by one they ______ [A. are brutally murdered B. mysteriously disappear C. given a ride by Ted Kennedy D. saved by a Sean Penn in a canoe]. Eventually there is only one teenager left who comes face to face with the evil killer. The teen finds out who the bad guy really is and comes up with a plan to _____ [A. destroy him B. send him back to his evil dimension C. expose him on "60 Minutes" D. elect him to public office]. The teen and bad guy grapple, but eventually the teen defeats him. Morning comes and the authorities come and _____ [A. send the teen to the hospital B. collect the bodies C. notify Oprah who immediately comes in to save the day D. ask the teen who their dealer is and who else is on "the stuff"]. While everyone leaves, the camera pulls back and we notice that the body of the evil killer is gone- which makes the audience think______ [A. "Oh- there will be a sequel." B. "Hey, did this really happen or did the teenager dream it?" C. "Boy, those wacky Clintons will get away with anything!" D. "I just paid ten bucks to see this crap?"]. The End.
You see- pretty predictable. I prefer the old school halloween stuff instead. You know - the kind of stuff they used to show on late night television hosted by Elvira: "The Creature from the Black Lagoon." etc. Yeah, the effects are pretty silly, and the acting can be a bit campy or stale, but there are some true gems out there that you won't be able to watch with the lights on.

In kicking off Halloween here at the shelf - we present for the next few days our own "Top Shelf" lists of different Halloween enjoyables. Some of these are family friendly - (some may not be appropriate for younger kids, but no "R" rated stuff here) and should remind us that Halloween can have a spirit of spooky fun, fright and mischief - not all gore (or algore). Today we present the "Top Shelf" Old school Halloween picks! Enjoy!

10. Mercury Theater Radio Dramas. Ok - this one might have thrown you off a bit, but what you may not realize is that your mind can conjure up images far scary than what Hollywood can come up with. Most of what you fear is in your mind, and these excellent radio dramas do an excellent job of painting mental pictures. Orson Welles is the genius behind the radio series "The Mercury Theater on the Air". The ensemble drama company put together many adaptations of literature and boasted the talents of John Houseman, Agnes Moorehead, and musical genius Bernard Herrman. You can find some MP3 downloadable versions of the show on the great site mercurytheatre.info. Two particular shows are great for Halloween: The War of the Worlds and Dracula. War of the Worlds is the classic that caused the mass panic on Sunday October 30, 1938, in which some people listening to the show actually believed that the world was being invaded by martians. Don't laugh- war scares in the news, and the presentation by Mercury Theater combined to make a climate of fear. Check it out. Also, Orson Welles as Dracula. Nuff said.
9. In Search of... If you were a kid in the 70s and early 80s, you know about Leonard Nimoy and In Search of.... It was the History Channel, Discovery Channel, Travel Channel, and TLC all rolled into one creepy package. The show covered a range of topics from the Amnityville Horror and the Loch Ness Monster to Nostradamus and the Charles Lindbergh baby kidnapping. Combine Leonard Nimoy's crisp, measured narration and creepy footage and reenactments and you've got a real life spooky series. The series still pops up occasionaly on the History Channel and a new version of the series hosted by X-Files' Agent Skinner, Mitch Pileggi, is on the Sci-Fi Channel. Remember the theme song? If not, here it is: click to listen. (RIght click and click "save target as")
8.Abbott and Costello Meet... - If you haven't watched any of these flicks- do yourself a favor and check them out. Bud Abbott and Lou Costello made some funny films with the Universal Studio's movie monsters (Both A and C and the monsters were Universal stars). The best is perhaps Abbott and Costello Meet Frankenstein which featured Franky, Dracula, & the Wolf Man. For a spooky comedy also check out their 1942 movie Who Done it? Also, for a more modern day Abbott and Costello spooky schtick check out Don Knotts and Tim Conway in Private Eyes.
7. Hitchcock. For suspense there is no substitute for Hitch (not Will Smith). Try Psycho or The Birds for some creepy Halloween frights.

6. Young Frankenstein. Mel Brooks' classic comedy spoof is a must-see for me every Halloween. Peter Boyle, Gene Wilder, Teri Garr, and Madeline Khan are hilarious. My favorite scene- the Putting on the Ritz Number. Marty Feldman steals the show as Igor. Honorable mention to Haunted Honeymoon.
5. Freaks. OK, here's where the rubber meets the road. Some of you may have never heard of Director Tod Browning's 1932 classic film Freaks- but you should. Those of you who are students of classic cinema (like we are at The Shelf) should know that Browning was fresh off of directing Bela Lugosi in 1931's Dracula when he left Universal for MGM. Browning took the script about the world of sideshow circus freaks and a "normal" woman who entered that world and turned cinema on it's ear. The story involves a trapeze performer, Cleopatra, who marries the circus midget, Hans, when she discovers he is heir to a fortune. The "Freaks" accept Cleopatra into their society, but later discover that she is really attempting to kill Hans and run off with her lover, the Strong man Hercules. The "Freaks" turn on Cleopatra and Hercules who meet a terrible end. Browning had turned the stereotypical sideshow performers into the real heros of the film, making you wonder exactly what makes one an abborent of nature- their appearance or their heart? By employing real circus sideshow performers, Browning shocked audiences and MGM alike with this film. In fact for many years MGM distanced themselves from the film, and no copy or reissue was released into theaters. Recently a great DVD issued by MGM has hit the stores full of extras. Check out- but be warned- this is not for the kiddies. It is a bit disturbing, but a great film that was ahead of its time.
4. Nosferatu- You may have seen Dracula- but may not have seen its papa: Nosferatu. This German silent film is one of two on this list. Lugosi has a creepy, evil aristocratic charm- Nosferatu is just all monster. Don't watch it alone. Or at night. The film pretty much steals Bram Stoker's book - and just changes some of the names. Stoker's widow actually went to court over the film which caused the name changes. 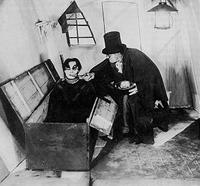 3. The Cabinet of Dr. Caligari- This is the second of the great German silents on the list. This is a pure psychological jaunt into fear. A young man tells a story of an old hypnotist, Dr Caligari, who comes to a local fair to put on display his "cabinet" which contains a somnambulist named Cesare. Dr. Caligari awakens Cesare, who is able to predict the future for members of the audience. During the fair, murders begin to occur in the village. You may think you know whats going on but you don't. The atmosphere, sets, and mood is in the mode of German Expressionism which is somewhat jarring, but adds to the theme of the film. Shelf trivia: The actor who plays Cesare is Conrad Veidt, who you might know better as Major Stasser in Casablanca.
2. Frankenstein. What else can we say? Would it be Halloween without Franky? Check out Universal's recent Frankenstein: The Legacy Collection, which contains not only Frankenstein and great extras, but also the sequels Bride of, House of , Son of, and Ghost of Frankenstein; and all for less than $30 bucks. So worth it. Of the sequels - Bride is the best. For a real treat watch the original and then Young Frankenstein as a double feature! Boris Karloff rules! (by the way - who else but Franky can narrate the Grinch?)
1. Dracula. Well, what did you expect? 1931 was a turning point for fright cinema and for 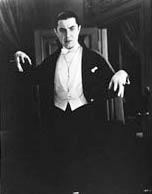 Universal studios. Dracula and Frankenstein were made that year and were hits for the studio. These films redefined the genre. Bela Lugosi was so identified with the Count that he could find little other work than to recreate the character or someone like it. Many have dismissed it as schlock, but it is truly a cinematic masterpiece. Director Tod Browning combined elements of German Expressionism and English Gothic Horror and made it into a artful interpretation of Stoker's tale. Check out Universal's, Dracula: The Legacy Collection for the definitive DVD edition.

Well Shelfers, this is the list. See- you don't have to go for the stupid blood and guts for a frightfully fun Halloween. No- you can stay true to your sensibilities of classic cinema and classic camp! And that isn't all - there are other great works that deserve honorable mention- Vincent Price's The Pit and The Pendulum, The Invisible Man, The Mummy, and others. Make it an Old School Halloween!
If you feel so inclined- post your votes or comments on our list in the comments section.

Next: Halloween Cartoon Special Countdown. The Shelf gets animated- be there.

listen to them. children of the night. what music they make.

This was a classic- Although I vote that The Wolf Man should have been on the list. That was a good one. I enjoy this site- I'll check back for more.