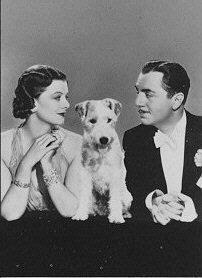 Director "Woody" Van Dyke once said that The Thin Man movies worked because of the chemistry and personalities of lead actors William Powell and Myrna Loy. Although they were playing characters from Dashiell Hammett's famous detective novel, the actors portrayed them with so much of their own charm and a real affection for one another. "Powell was just Powell," he said, "and Loy was just Loy." The Thin Man premiered in 1934, and Powell and Loy began a on-screen partnership that lasted for 14 films. That's one of Hollywood's best records folks, Ginger and Fred aside. Although Powell and Loy were never married, many people thought they were a real married couple. In reality, William and Myrna were close friends, sharing a similar sense of humor and sensibilities. The charm and chemistry was so natural in their films, and you could tell, above all- they were having fun. Loy once said about Powell, "I never enjoyed my work more than when I worked with William Powell. He was a brilliant actor, a delightful companion, a great friend and above all, a true gentleman." And of working with Loy Powell remarked,"We weren't acting, we were just two people in perfect harmony."

Although both are better known for The Thin Man series, their other work, together and apart is superb. One highlight is their film Libeled Lady , which also starred Spencer Tracy and Powell's real-life flame, Jean Harlow. One of Powell's best films was My Man Godfrey , with ex-wife Carole Lombard. And one of Loy's best post-Thin Man comedic roles was in Mr. Blandings Builds His Dream House , with Cary Grant. Such wonderful talent and sophistication, combined with a relationship built with mutual admiration and natural affection is what makes The Thin Man one of films best series. Although Powell and Loy top the list, the series is filled some of the best actors and actresses rounding out the supporting cast. Some of them were just starting out and others you recognize the faces and know they have been in many other wonderful films. Names like Jimmy Stewart, a young Donna Reed, Virginia Grey, Cesar Romero, Gloria De Haven, Keenan Wynn & Jayne Meadows were all either just starting or establishing solid careers. The lovely Maureen O'Sullivan appears in the first Thin Man, having already started as Jane in the Tarzan films, and before having played in the Marx Brother's classic,A Day at the Races . Dean Stockwell of Quantum Leap fame, plays Nicky Jr. in the last entry of the series, Song of the Thin Man. Wonderful character actor Harry Davenport also appears, as well as legends Shemp Howard and Sheldon Leonard. 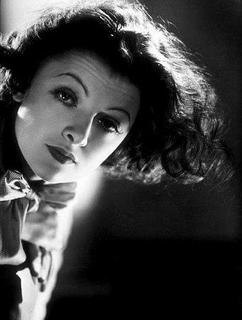 But Myrna Loy and William Powell are why we care. The first few film plots were great and the last few were passable- but the on-screen relationship was the center of all the films. W.S. Van Dyke, who directed the first four films, recognized their chemistry made the films click. This was a married couple, who loved each other and accepted each other, faults and all. They knew each other's weakness and strengths, and rather than patently change other- they worked to make each other stronger- and had great fun in the process. What was conveyed in film was the genuine fun and love in a marriage, with comedy and mystery to boot. This was combined with fantastic dialouge and witty banter. And I just have to say, Myrna Loy was positively beautiful. Ethereal.

Later this weekend, in part II, a look at the Thin Man movies and the lasting impact of the series.

oh, Nicky, I love you because you know such lovely people.
Posted by J.C. Loophole at 10:37 AM