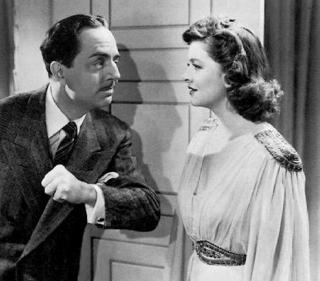 The Thin Man series was captivatingly cool. The films centered around Detective Nick Charles who had married wealthy socialite Nora, and retired to manage her family's assets. On paper it almost sounds like a set-up for a film noir feature. However, Nick and Nora weren't gunning for each other over who would keep the loot. They were a charming couple in love, enjoying each others company while overlooking each other's faults. They found themselves in situations that, to Nora, looked ideal for Nicky's detecting abilities. Nora prodded Nick to get involved. Nick generally tried to stay out of the mess, until he realized that the police were on the wrong trail. Nick, Nora, and Asta uncovered the clues, sometimes with the help of some of Nick's former "associates." Then all of those involved in the crime were gathered together so Nick could sort out the whole affair. Once found out, the guilty party often tried to make a break for it, but ended up in the hands of the police who were around for the show.

While the general formula of the films seemed standard, the execution was anything but. The films incorporated certain elements like running gags, intricate plots, and Nick and Nora's relationship that elevated the series above all else. The films could have been described as detective yarn, screwball comedy, or romantic adventure; in reality the films were all three.
Running gags kept the series light. Nick's drinking was one. The certain appearance of Nick's former associates was another. These associates were either in law enforcement, or were former cons that Nick had collared at one time or another. Most of Nick's "associates" had nothing but admiration for Nick and some had somewhat reformed. Kind of a running gag within a gag, most of the "associates" assumed that Nick was with a "ladyfriend" instead of the missus. Nick always told them Nora was his wife, and proudly so. But that didn't prevent the guys from winking and muttering "I get it! I get it!" But when you are introducing your wife to men called "Fingers", "Lefty", and "Wacky", whaddya expect?

While comedy and plots were essential to the films, they would not have been the sam

e without William Powell and Myrna Loy; or, quite frankly, without the Director, W.S. Van Dyke. Van Dyke had just directed the two, along with Clark Gable in Manhattan Melodrama. (Which, trivia fans, was the film that John Dillinger had just finished watching when the FBI ambushed him outside of the Biograph Theater in Chicago.) Van Dyke had watched the natural friendship that had blossomed between Powell and Loy, and having recently read The Thin Man, thought them perfect for Nick and Nora. They began work on the film immediately after wrapping up Manhattan Melodrama. MGM was originally hesitant to cast Loy in the film, but Van Dyke secured her part after agreeing to shoot the film in two weeks. The result was a classic. The easy banter, comedic acting and chemistry between Loy and Powell carried all six films. Even after watching the films several times, you may not remember the complete in and outs of the suspects and murders, but you always remember Nick and Nora, and the lines.
Consider:
Nick: I'm a hero. I was shot 2 times in the Tribune.
Nora: I read where you were shot 5 times in the tabloids.
Nick: It's not true. He didn't come anywhere near my tabloids.
Or:
Nora: How did you find me here?
Nick: I saw a great group of men standing around a table. I knew there was only one woman in the world who could attract men like that. A woman with a lot of money.

The film series also inspired a long running radio show. Several different actors portrayed Nick, while Claudia Morgan held down the fort as Nora. When T.V. came along, Nick and Nora were along for the ride. Peter Lawford and Phyllis Kirk portrayed the couple for 3 seasons from 1957-1959 in the television series aptly titled, The Thin Man. The NBC show was less entralling than the radio series or, of course, the film series. Although Peter Lawford made a decent enough Nick, Phyllis Kirk didn't give Nora enough... well, Nora. Powell and Loy own the roles. The various incarnations of The Thin Man created a path for other married sleuths to follow such as Television's McMillian and Wife and Hart to Hart. And Nick and Nora were marvelously spoofed by David Niven and Maggie Smith as Dick and Dora Charleston in Neil Simon's Murder By Death.

A few facts about the series:
The six films: The Thin Man, After the Thin Man, Another Thin Man, Shadow of the Thin Man, The Thin Man Goes Home, and Song of the Thin Man were made over the course of 13 years. The running title does not refer to Nick; the Thin Man actually refers to the murder victim in the first film. W.S. "Woody" Van Dyke directed the first four films, but died before the filming of the fifth. The Thin Man Goes Home was directed by Richard Thorpe who had previously directed William Powell and Myrna Loy in Double Wedding. The last film, Song of the Thin Man, was directed by Edward Buzzell, who also directed the Marx Brothers in At the Circus and Go West . Myrna Loy and William Powell both had careers in silent films, but both also had roles in important films in the transition to talkies. William Powell starred in Paramount pictures first talkie, 1928's Interference, and Myrna Loy had a small part in 1927's ground breaking The Jazz Singer from Warner Brothers. Just for some perspective on how much they worked, in the years between the first and second Thin Man films (1934-1936), both Loy and Powell were in 14 films each, 6 of which they starred in together. The Thin Man was nominated for 4 Oscars, including Best Picture. The sequel, After the Thin Man was also nominated for a Best Picture Oscar, making it the first film sequel to be so honored.

Later, in Part 3, a review of the DVD set, The Complete Thin Man Collection, new from Warner Brothers.