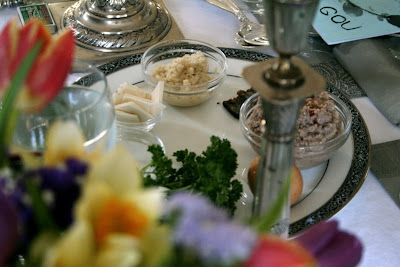 To all who celebrate: Happy Passover!
I am not Jewish myself, but growing up I had several good friends who were, and I attended a number of Holiday meals and celebrations. I was invited to several Passover meals and enjoyed being there and learning a lot about my friend, his faith and his family. I have been intrigued by it's history and it's connection to Christianity. And of course who can forget the accounts of Moses displayed onscreen in The Ten Commandments. When a society rejects religion in place of it's worship of big government, it loses not just a baseline need or motivation for ethics, citizenship and morality that religion instructs and supports. Society also loses some of it's sense of place and history. One of the big reasons for the week-long celebration is for Jews to remember and not forget their heritage. All of us could learn a little from that.

I found some interesting links for you perusal of commentaries and on the history of Passover:Maggie's Farm has linked to some good essays.
Check this nice post out at Seraphic Secret (hat tip to Libertas)
The History Channel website has a bunch of stuff including video clips. 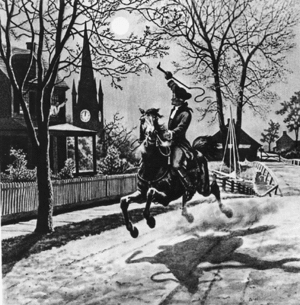 Also today is Patriot's Day. It's the day following Paul Revere's Ride in which the minutemen and colonials along the route of the march of a British regiment at Concord fired upon them to prevent them from siezing and destroying a supply of weapons and ammunition; as per General Thomas Gage's orders:

Having received intelligence, that a quantity of Ammunition, Provisions, Artillery, Tents and small Arms, have been collected at Concord, for the Avowed Purpose of raising and supporting a Rebellion against His Majesty, you will March with a Corps of Grenadiers and Light Infantry, put under your Command, with the utmost expedition and Secrecy to Concord, where you will seize and distroy all Artillery, Ammunition, Provisions, Tents, Small Arms, and all Military Stores whatever. But you will take care that the Soldiers do not plunder the Inhabitants, or hurt private property.

Check out Jules Crittenden's blog for a wonderful section and essay including many first hand accounts. Do yourself a favor - read them and remember why the Right to Bear Arms was right up there with Free Speech and Free Worship with the Colonists. "Clinging", indeed.
Therefore, it's also the 233rd anniversary of Paul Revere's ride. Please check out our good friend, Laura and her great post about PR and several corresponding links she has posted! It's good stuff!

As far as reading more about it, might I recommend one of the best accounts, not only of Paul Revere's ride, but his place in history and American culture (or lack thereof) in the intervening years. It's David Hackett Fischer's aptly titled Paul Revere's Ride. It's authoritative, well written, well researched and highly readable. Pick up a copy- it's one for your personal library. Another great book is Robert A. Gross's The Minutemen and Their World. It's an excellent look at the people and families of Concord and Lexington. And Laura's recommendation of Esther Forbes' Paul Revere and the World He Lived In and Arthur Tourtellot's Lexington and Concord: The Beginning of the War of the American Revolution are Shelf recommended as well.
Maybe reading these will help us to remember...

All who thirst for freedom may come with us. The shadow of death will pass over us tonight, and tomorrow we will see the light of freedom.

Thank you for your Passover greetings, J.C.

May I take this opportunity of inviting you to visit Sallie & Mel’s Golden Age Of Hollywood at http://isbumstown.blogspot.com/.