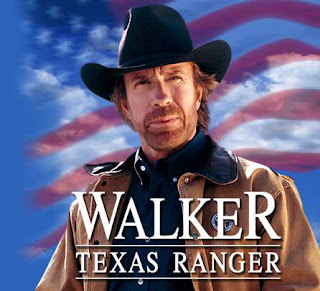 Hello Shelfers and welcome to our first ever TV on DVD review. For our inaugural offering we reached out to Mrs. Baravelli, she of the popular White Christmas post from last year. She is a fan of Walker Texas Ranger, and since we are on our final night of our Walker contest, we thought it would be a perfect time for a review of the Season 4 set we are giving away. And yes, this is the last night for the contest so get your email entry in! Just send us your name and address to randomshelf@hotmail.com and be sure to put "Walker Texas Ranger Contest" in the subject line. We'll be randomly drawing 5 winners from the entries tomorrow, so good luck! Now without further adieu... Mrs. Baravelli, take it away!

I must say that I was pleased and honored when J.C. requested my assistance at reviewing a new DVD collection he received. Was it because of my keen television intellect, my knowledge of acting facts and history, or my concise reporting style? Oh, but all of these reasons are for naught. The biggest reason J.C. requested my assistance is that I am a big….wait for it….DORK!!! Yes, I am a big dork and oft-times my choice of television and film entertainment is proof of this disease. For this reason, and this reason alone, I was asked to review the collection of the 4th season of Walker, Texas Ranger.

Now, I am certainly not trying to under play the value of this television program by saying that I am a dork. I just like my entertainment simple. I don’t need the high drama or the Emmy winning acting - none of which is found in this program. I don’t particularly like hanging on week after week and having to remember what happened in the 1st episode of the season to follow along in the 18th. I also don’t enjoy the grittiness that some of today’s programming brings. I follow the time old adage of KISS - keep it simple stupid. That ‘s what this show did. This box collection brings all of the episodes from the ‘96-’97 season of Walker.

The Show:
Chuck Norris stars as Texas Ranger Cordell Walker who fights crime in the big state of Texas more with his kicks and Cherokee instinct than with his gun. His partner, Ranger James Trivette, helps in the fight with his computer savvy skills, quick wit, and unending loyalty to his partner. Along for the ride are Assistant District Attorney Alex Cahill, Walker’s love interest, and his best friend and retired Ranger, C.D. Parker. The four friends help fight crime with high adventure and often while saving each other at one point or another.

This season was full of feel good, “after school special” plot lines, including Buddhist reincarnation, a small girl standing up to gang violence, and Christmas with a host of orphans. It also includes some more action packed sequences with some ex-cons, a white supremacist group, drug smugglers, and kidnappers of a bus full of children - now that’s what I call family entertainment!! This season is also where we get to see what happens to Alex‘s stalker “Victor LaRue”, my favorite returning character, only because the actor added a little spark to the story. We meet Alex’s father, Gordon Cahill, played by veteran television and screen actor Rod Taylor. We also meet Trent Malloy and his family in the Sons of Thunder episodes, later created as a short -lived spin-off to Walker, which I also watched.

If you’re looking for some action packed adventure without all of the blood and gore on today’s screen then this box set doesn’t disappoint. In the episode “Swan Song” Walker tracks down the wreckage of a small plane used in a bank robbery many years before. Alex insists on joining him, thinking it will be a fun adventure for the pair. Little do they know that some other criminals are also trying to find the plane wreckage, along with the money stolen in the robbery. In this one episode Walker and Alex scale a mountain under gun fire, Walker gets attacked by a bear and Alex has to, for once, help him - mixing herbs, making a poultice, and keeping him warm so he can recover from his wounds. As if it couldn’t get any worse, there’s also a scary cannibal on the loose. So much for the mountain get-away! A lot is going on in this episode and the same can be said of the entire box set. 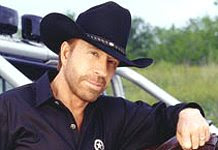 Bonus Features:
Sad to say there are no bonus features in this set. I think it would have been a lot of fun if Paramount had included some behind the scene action sequences or even a fun blooper reel.

Audio/Video:
The visual and sound effects on the box set are just as good as when the episodes originally aired.

The Bottom Line:
So, is this collection worth the trip to to your local big box store? As a fan of Walker, I would say yes. I still catch a rerun or two now and again. It would definitely have been a lot more enjoyable with some extra bonus behind the scenes features, however, the episodes are just as I remembered. I guess they’re following my advice - KISS.

You know? Life's funny - you can sleep off a hangover but you can't sleep off ugly.

Email ThisBlogThis!Share to TwitterShare to FacebookShare to Pinterest
Labels: tv on dvd review

good to hear from a woman's point of view. She should do some more for the column. But of course I like to hear from J.C. Where is
Wolf???

I used to like Walker a lot, especially the early seasons like this one. I'll have to netflix this set! Thanks for the review.

And yes, what has happened to Wolf?