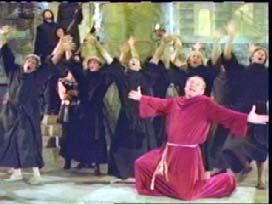 Several recent happenings have caused me to ponder over a little something we call communication. Just plain crazy!

First off- a recent brouhaha occurred when a CNN translator “misinterpreted” a speech by recently elected Iranian President “Wacky”. One brief excerpt where the President supposedly said that nations had a “right to nuclear energy” was mistranslated as “right to nuclear weapons.” CNN ran the subtitles, but they were quickly fixed and CNN apologized profusely. CNN stated that the interpreter was a usually reliable independent contractor, but his services were terminated. No word on whether or not the interpreter will be able to fall back on his other degree in Freudian slips. Um- small note to CNN: to some people, including power mad dictators...er, politicians, the terms “power” and “weapons” are usually synonymous.

Second - Pat Robertson said last week that Ariel Sharon had a stroke, because God was punishing him for giving up land to the Palestinians. The media practically tripped over themselves trying to nail this guy to the wall. It was a very stupid thing to say. I don’t think God is going to give Sharon a coronary over real estate- I think nothing can frustrate what God wants to accomplish. Our weakness and general stupidity gets in the way. However, I don’t think it warranted the media having a TVgasm at the chance to rake Robertson over the coals again. They made it worse by over-hyping it.

Third- Our favorite “Ragin’ Cajin Mayor” Nagin made a comment on MLK Jr. day this week, when he opined that God must be angry at America and sent the Hurricanes to punish us. Well, well. I looked everywhere for 8.9 outrage on the Richter scale on the media, but the crickets’ chirping kept distracting me. Apparently it is OK if you say God is punishing America or individual because of the war or other political reasons… and NOT if : (please pick the right answer to finish the statement)
A) you are a religious leader a speaking for religious reasons
B) you are a conservative and are speaking without thinking
C) you are anyone the media disapproves of.
D) all of the above.
That’s correct, the answer is of course D. Five bonus points if you answered “Anyone who voted for Bush or supports the war.” Thanks for playing,
The statement Nagin made is asinine. The reasons he stated are even worse. But the statement he really screwed up with was “New Orleans will be chocolate again.”

OK. We’ve mentioned before how Nagin has made stupid and sometimes racist statements, and is in general a moron- but New Orleans if you elect Nagin again that honorary title passes on to you. Lest you get all wobbly on this subject, Shelfers, let us remind you that stating a city or town should be predominantly or completely one race is discriminatory, and.. uh, racist. Apparently Mayor Nagin didn’t get the memo. In the words of Napoleon Dynamite: “Idiot!”

Now, realistically speaking we probably should approach this from the angle of “How to Disguise your True Thoughts and Win Friends Through Political Communication” but I think that the real problem here is that, despite all the technological advancements in communication we have achieved in the last century… we still don’t know how to truly communicate with one another. Now guys, before your “we need to talk” radar goes off- relax and stick with me here. 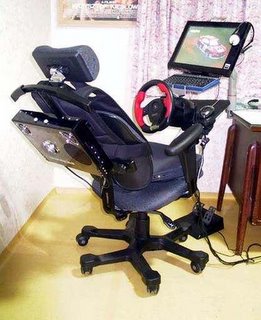 Where has all the chat rooms, 24 hour news cycles, sound bites, emails, and instant messaging gotten us? Well- pretty far actually. I’m not even coming close to suggesting that “instant worldwide communication” is a bad thing, or even the collapse of civilization. I think the advances in communication are a phenomenal boon to humanity. I wouldn’t be running a commentary blog if I thought otherwise. However- I think for all our advances we have yet to master them. In fact, I believe we have yet to master how we speak to each other. And it’s not just that we aren’t polite.- it’s that we don’t think before we speak, transmit, fax, email, or even –gasp- blog. How many times have seen stories like the ones mentioned above; or anyone who, in an effort to be first with the story or sound the smartest or hippest, made a very big mistake with the facts? Too many times, and the media coverage of Katrina was perhaps the most prevalent example. Tune in next time for part II. Ruminate over these things and we'll see you then. Same Shelf-time, same Shelf-channel.

Where can I buy that chair?

Thats a homebrewed chair some ubergeek created. My version would have to incorporate a recliner.