communication, what a show 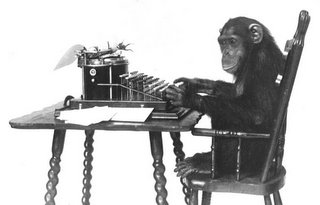 Forgive me if I sound somewhat harsh- I know you didn't expect a Spanish Inquisition. But I think if we are going to advance communication, we should just try to be better at it as well.
There is an old saying (stop if you've heard this one before).... Alright- we at the Shelf like old

sayings. Sure, it may save some money to use young sayings and they work harder - but they have less experience. And although foreign sayings work on the cheap, they usually come with a lot of friends and they are hard to understand. What I wouldn't give for a straight forward old saying instead of some ten -stanza foreign ditty that never makes sense. Support America - use old sayings!

Ahem. Satire, you old dog you. Anyway - you are no doubt familiar with the phrase: "Jack of all trades, master of none." Yes? Well- its seems that one of the thing throughout time that the human race in general has yet to master is communication. We dabble and do well in many things - but a lot of the important stuff we don't seem to master. It is somewhat understandable, what with so many languages and idioms around the world. One thing that always strikes me about some sci-fi movies is how when earthling encounter other planets- that whole planet has like one language. Or in the case of Sci-Fi Empires - several planets all speak one language. Klingons- I'm looking at you.... Why doesn't Starfleet or the Federation or whoever, ever visit a planet and find a bunch of inhabitants at the equivalent of a bar or stock

exchange (pick your fancy) and hear several different languages or accents going? When they ask one of the inhabitants to translate - why can't they say, (in their best Shaggy voice) "Sorry - that dude is like, from another country man. Like, way out on the other side of the planet, man. Like, what did you think? Just because we live on the same planet, we, like, speak the same language?"

Maybe. Something that stands out in the study of history - especially when one studies wars or politics and governments- is how many things have hinged, failed, or turned on communication or the lack thereof. Battles have been lost because of late dispatches informing generals of troop movements, or intercepted communications with vital instructions. Before the 20th century, it was virtually impossible to have instant communication between generals in different areas of the field. Runners or riders were sent with instructions or messages and sometimes they didn't make it. Remember the end of the movie Gallipoli with Mel Gibson? At the end, Mel was sent as a runner to communicate the situation to the superior officer that the Australian troops in the trenches were facing certain death if the rushed the Turks. Wave after wave were cut down. The officer demanded his orders be carried out. When he returned, Mel was sent to go over the

officer's head to the General who then decided to hold off on the attack while they "reconsider." In the meantime, communication lines which had been down were restored and the officer, oblivious of the General's new orders to Mel, demanded the troops attack. Mel rushed back for all he was worth, but in the end, he didn't make it. A very dramatic example of what I'm talking about.

Today, communication can be instantaneous - around the world, and yet we still can make the same mistakes. For example, news in the past was never "as it happened." I remember in elementary school listening to a recording from an old radio show of "You Were There." The show dramatized the events surrounding the sinking of the Titanic. Very dramatic- and somewhat fictionalized. But it clearly succeeded in presenting a tragic event as if you were there. Today news agencies have the ability to report news as it happens. Reporters, and sometimes anchors, are sent to hot spots or to areas in advance of anticipated event so they can bring it into our living rooms. Not too long ago, we were amazed at watching a war as it happened- The first Gulf War. Its more expected now. And yet the reporting and the stories don't always come across as if we were there in other ways. Not only do politicians apologize and backtrack for comments made without thinking, in an effort to be first, media ends up backtracking and (rarely) apologizing for getting things wrong. The competition to hold our attention and to beat the other 24-hr guys in the rating is intense and therefore sometimes the accuracy and reporting suffers. Sensationalism rules the day.

Sometimes these things are a double-edged sword. Advances in technology means that entertainment and access to information is also instantaneous. I can carry a bunch of music, a movie, and a game on my PSP, with photos and access to the web to boot. It's probably more entertainment than I realistically can handle for a day, but it's great to have it on the go for downtime or waiting time. I, unlike many others in this day and age, haven't bought into the notion that every minute of the day must be occupied. But I must admit that I have nonetheless acted as if I do sometimes. Being uploaded, downloaded, and plugged in 24/7 rules some people's lives. Yes, instant and the ultimate in communication is at our fingertips- but have we mastered it as well? All these things are great, in moderation. We need to get a handle on it before we overload. Are people talking to each other, as much as they are emailing each other? I don't know- I don't tend to worry about that as much- I'm not an alarmist.... While some view these things as the downfall of civilized society- I would remind you that has been a common argument at many stages of human civilization. I'm sure that you can see it now-

The Shelf players present: You Are THERE!
Narrator: Throughout the echoes of time, man has strived to improve his lot in the world and to fight and overcome the harsh mistress that is nature.Deep in the recesses of a cave we listen into a conversation and witness the birth of the first "Alarmist". And YOU ARE THEREEEE!

Caveman Charlie: Hiya Sid. What's shakin?
Caveman Sid: Nothing much Charlie- you know, just chewing up berries and twigs and then putting my hand on the wall and spitting all over 'em. I got a show at the gallery next week.
Caveman Charlie: That's groovy Sid. Your "Stick Men and Stick Animals" show just killed last month!
Caveman Sid: Thanks. Bad thing about wall art is you can't sell them. I can only get 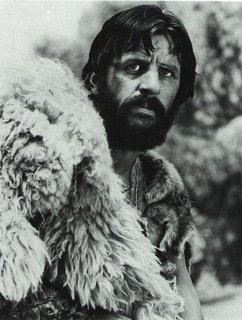 commissions.
Caveman Charlie: Hey, I was down at the local greasy bone, and guess what I heard? Some nutty kid took some rounded rocks and spent all week grinding holes in 'em. Calls them - get this- "wheels." Ha! What a wackjob!
Caveman Sid: Heh- yeah, it sure takes all kinds. What was he doing that for?
Caveman Charlie: Says he stuck a tree branch in the holes and rolled them around for a while. Says next week he's thinking of putting some more branches across the middle like some kind of floor.
Caveman Sid: What for?
Caveman Charlie: Says he's gonna load his bones on it and drag them with it instead of carrying it on his back!
Caveman Sid: Man, I tell ya, these "modern people" and their gadgets. First it was the pointy rock on the spear, then the Jones kid down the valley with his "fire." I tell you Charlie this new generation baffles me! All their rush, rush, rush, with all their "tools" and walking "erect." And what's it gonna get them! They're gonna rush right into the ceremonial death hole, that's what. A premature death. What's wrong with living a slow, regular life? You live longer! My grandpa made it to 25 years and never had a tool or firestick his whole long life!
Caveman Charlie: Sid- you're preaching to the choir man! I betcha that Jones kid won't make it past 15!

Narrator: And thus the first Alarmist was born. Join us next week when you will witness the advancement of the communication age:

Customer: Thanks for showing me around the shop, Gutenberg. Hey, what do you call that thing there?
Gutenberg: It's a "Printing Press." But I've modified it with movable type so I can print more books and faster. I just got an order to print some Bibles this week!
Customer: Man! Isn't that the way? Outsourcing already! I tell you those monks will be out of a job yet! Soon these machines will have me out of a job. My boss is already looking into ways of speeding up shoveling dung.

Narrator: And you will know because, YOU ARE THERE!


Think about it! In it's basic form, the book as a communications medium as been good for centuries and with little change in basic design. We still read them - and perhaps have more access to them than in any other time in history. Do we take full advantage of it? I wonder. Don't get me wrong - I think that the gains in technology are great. I just think that if we could learn to master them or master ourselves better, we would be taking full advantage of it. I don't lament that technology has made us cold and lifeless. I just contend that for all our advances we still have the same basic problems we have always had. And I guess that comes with being human. So the hope is, Shelfers, that we will stop to take inventory of ourselves and the way we communicate. I hope to see more bloggers out there, and more people accessing books online from a library around the world, and I hope to hear people talking about news stories that happened this morning from around the world. I just hope that we will be responsible with it- responsible in what we write, in the information we share, and in cross checking and getting the facts right. And always remember the Shelf mantra: "Think for yourself." We can become better at communication. The technology and ability is there- are we willing to become masters over it or become mastered by it?

And of course, with the birth of the artist came the inevitable afterbirth - the critic.

Excellent two parter! Interesting how you subtle wove in Mel Brooks and Monty Python. But that's why your name (real name?) is Loophole! I don't think we'll ever evolve past where we were in the middle ages- we just have fancy toys. Very flawed human beings with fancy toys.
Where is Flywheel?