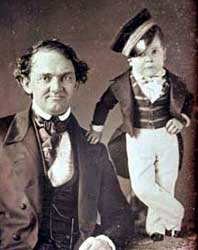 Things brewing in the realm of books have left me a bit perplexed lately. Book clubs run by famous "O"s - as in Oprah and apparently Osama- have dominated headlines. No doubt, by now, you know about James Frey and his little deconstructionist attempt at fiction disguised as

non-fiction. There have been others: a Native American memoirist, who, as it turns out, was not much of a memoirist and may not have been Native American. Not even Indian or from Indiana. It turns out that all he is- is mad and sick. And not "I've got a cold" sick either. Then there is J.T. LeRoy -who defies description. Leave us say that perhaps even Rick James would be aghast. Nonetheless his memoir of his days of pimpin' and other unmentionable acts has been exposed as well as the persona he adopted. It seems as if we live in another age of the charlatans. With so many authors and info-mmercial personalities, and promoters of pyramid and get rich schemes, and sue-happy opportunists and criminals running around, PT Barnum must seem to be a quaint relic of the past- if he is remembered or known at all. It's one thing for all these liars and con-men to be perpetuating their frauds on the public. What is more disturbing is the defense being mounted on behalf of these people and the sympathy and genuine "who cares?" attitude.

I don't consider myself a cultural prude per se, but something really bothers me with the underlining meaning of these different events. We say it is wrong to lie, but in reality- we think it is alright in certain situations, viz: situations that don't affect us. Now before you start bemoaning "cultural relativism" Shelfers, let me suggest this: our popular culture as well as out political culture has always had a elite section that considers itself above and beyond the rest and therefore, possessed of the right to tell everyone else what is and what isn't worthy of attention. I will never forget, years ago, watching a special on PBS - hosted by McNeil or Lahrer- about the Kennedy assassination. Several panelists, including a historian, discussed the implications of the tragedy and what meaning it has for us today. Someone on the panel lamented that the famous Zapruder film, which most documented the assassination, was made accessible in some forms to the public. He contended that it should be archived under lock and key and made available only to authorized officials and scholars who knew what to make of it. The public, he commented, couldn't be trusted to "interpret it correctly." Of course the Zapruder film was the subject of a court case, in which the government sought to seize the original on claims of the public interest. The Zapruder family beat them to the punch and it was eventually made more accessible in the form of DVD. Technology and capitalism can trump elitism.
The point is, for every event, no matter what you and I think- there will be someone on TV to tell us what to think.
Repeat the Shelf mantra, Think for yourself.

Some talking elites (especially the book publishers) are defending the publications of these books and in essence validating the fraud. Frey defended his own work on Larry King, stating that the book was "the essential truth of my life." See that? The key word is essential. You see, the rest of the lies or exaggerations are warranted because the illustrate an "essential truth." It has been a while since logic class, but lies do not support or buildup truth. They undercut the truth. A truism cannot logically be supported by false propositions...Captain.

So why do people like Oprah, for one, and other so called commentators defend this "new" type of nonfiction. (One defender stated, in reference to one the lies told, that it only "slightly matters", and doesn't matter to him, because his voice is "powerful and original." Book Publishers have gone as far as to state they don't fact check their books. Why are words like "embellishments" and "exaggerations" or "added essence" used instead of what they really are: lies? In the words of Professor Farnsworth, "Huh, Whaaaa?" The irony is that it's the same

mainstream media that is attacking President Bush for lying, although that has not been established, despite how much others want to say it. Again, to them it's OK, unless you are someone they disapprove of. Sure politics and war are mighty important things, more so than lil' James Frey. However, the underlining current of acceptance in our culture is great cause for concern. How long before we don't mind politicians lying to us?

Why are there people willing to condone or even support these lies?
Well here are the down and dirty reasons:
1. No one likes to lose money
2. No likes to be made a fool.
3. Ego overtakes truth
4. Exposed lies make us feel vulnerable.

Let's take them one by one for a second.
1. I think the book publishers and Oprah to some degree fall in this category. These books, Frey's in particular, made m-o-n-e-y. Why? Well, in short, victimhood and sensationalism sells. Victimhood has made inroads into popular culture has themes in books and movies and in our own language. It seems as if we feed on it, partly because if everyone is a victim then no one, perhaps save a faceless corporation or government, is responsible for our failings. When

somebody like Frey publishes his supposed "life of crime and addiction" memoir- we celebrate that someone has the courage to be responsible for his acts - and still we rob him of that by casting addiction as the villain. It makes us feel better about ourselves in so many ways. In fact, that is the exact point that most of the public apologists make for Frey, LeRoy and others - the "message" made them feel ___. You fill in the blank. Nonetheless- the means big money- certainly for book publishers. They do not like to lose that...uh, investment.
2. Oprah, and other commentators I think, fall into this category. Oprah's reputation with her friends are fairly ironclad- but this could (and does to me) make her look bad in the media. Frey's appearance and Oprah bookclub pick are well known. However, I don't think that it will really hurt her in the long run. Unless, of course she decides to pick another book with dubious contents. Oh, wait. Commentators (usually reviewers) are more recalcitrant. They hyped and supported the book. Now they have to support why they supported the book. Not a good position to be in.
3. Egos of authors, publishers, reviewers, and fans alike are bound to be somewhat bruised. How often do we, in everyday life, stuff the truth about ourselves deep down inside, lest someone discover who we think we really are? In reality, everyone has problems, but our egos suppress our growth.
4. Exposed lies that we once accepted as truth, expose our beliefs, our notions about our judgment, and leaves us vulnerable. No one likes that. It's easier to deny it happened than to be vulnerable and grow from it. These books were presented and sold as memoirs. The fact is, within publishing, memoirs playing fast and loose with the truth are an understood fact. However, they present, advertise, and sell them as non-fiction or biography. Would you buy a memoir of an individual if the cover proclaimed: "The true (although in some spots made-up) account of a incredible life ( with some embellishments and exaggerations)." I think not. We ask no less from other works of non-fiction: history books for example. Not too long ago, Historians Stephan Ambrose and Doris Kearnes Goodwin were lambasted for inserting words that were not their own in their books. They included, word for word, some passages they had taken from another work without citing the source. In school we call that plagiarism. The historians claim that it was unintentional, a mistake, and that they meant to cite the source. They were nonetheless raked over the coals. Professor Ambrose died around that time, and Ms. Goodwin has survived the ordeal, somewhat intact, although her TV appearances have diminished. To give you a clear picture of the double standard, a Professor that I know, who railed on Ambrose at length about his crimes, recently referred to Frey as a "brave man wronged." I see. So class let's summarize: Possible inadvertent plagiarism= execution worthy crime. Lies published as non-fiction= hero.

In the end, this too shall pass. It's the legacy that we should worry about. Lies have become more and more acceptable in our society, and unlike PT Barnum, the hoaxers are not "showman"- they are now celebrated as heroes. That's not good for any society. Thankfully, there are as many deriding this latest round of chicanery as there are supporting it. Maybe more. But what will it be like next time? Truth matters Shelfers. It should matter to you. Cultural and moral relativism are dangerous things, they prop up an existence on lies, like thin toothpicks, than upon the concrete of truth. Truth is hard, and as R.E.M. said, truth hurts.

As always, we welcome and encourage your comments.

It is only out of sheer morbid curiosity that I am allowing this freak show to continue.