the week that is

It’s media roundup time for the week, Shelfers. We'll try and give you a heads up on stuff being released in stores every week with our Shelf Picks of the Week. Buckle up, it’s going to be a bumpy ride! Oh, Bette – you slay me.

The Pink Panther Classic Cartoon Collection:
The pink one himself is dropping in stores today. A great collection that includes not only the Pink Panther shorts, but also – all of the animated opening sequences from the Pink Panther movies. This was set to hit the streets back in ’05, but as with all things Hollywood, marketing caused a delay. The DVD set and the DVD movie collection were set to be released about the time of the new Pink Panther movie starring Steve Martin and Kevin Kline. The movie was pushed up to this February, hence the delay in the DVD set. Marketing believes in coordination. No matter what you think of what’s hitting the theater, be sure to pick this set up. And me? Well, I love the Pink Panther show with the Inspector and the Anteater and the Ant cartoons, but they are not in this collection Also recommended: As a companion piece, Jerry Beck’s Pink Panther: The Ultimate Guide.

Barrymore.
Lust for Life: Vincent Minnelli’s lush biopic, starring Kirk Douglas as Vincent Van Gogh and Anthony Quinn in an Academy Award winning supporting role as Paul Gaugain.
The Champ: Oh, man- talk about an original. We’ve seen the story repeated in other movies dozens of times in different ways. This father and son tearjerker was remade in 1979 with Jon Voight and Ricky Schroder, but

Director King Vidor pulled a performance out of Wallace Beery and Jackie Cooper in this 1931 original that can’t be beat. You’ve seen it on the late, late show- now own it in your classics library. Nominated for 4 Oscars, with Wallace Beery winning a Best Actor statue (actually tied with Fredric March for Dr. Jekyll and Mr. Hyde) .
Other Oscar winners from Warner’s hitting the street this week: Cimmaron, Kitty Foyle, Johnny Belina, and The Good Earth.

The Rat Patrol: The Complete First Season. Great action adventure series set during the North Africa campaign of World War II.
Avatar: The Last Airbender : Book 1, Volume 1. Many have been surprised by how well done this Nickelodeon animated series has been. An involved storyline, excellent animation (very light touches of anime – of which I am not a fan) and some excellent brushes with Japanese mythology, this excellent series is one of those rare intelligent and engaging finds for adults and kids alike. Our only complaint is that rather than release the series in a Season set- they have chosen to break them up into multi-episode single DVDs.

David “Fathead” Newman: Cityscape. A wonderful disc by a tenor sax legend. Newman, as many know, was once a sideman in Ray Charles’ band and became the man you wanted in your crew. He heads his own band and his sound is distinctive. This album features a great jazz version of Goldfinger, one of my favorite James Bond themes. Also recommended: If you like what you hear, you’ll love last year’s disc: I Remember Brother Ray, a tribute to Ray Charles. It has one of the most haunting renditions of Georgia on My Mind I’ve heard. 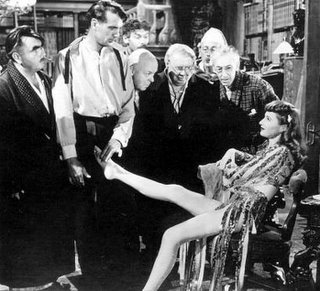 Turner Classic Movies has some can’t miss favorites this week that are not yet on DVD:
Tuesday Jan. 31st: Ball of Fire with Barbara Stanwyck and Gary Cooper. Barbara is a favorite here at the Shelf, and is at her best in Noir or in comedy, as she is here in this screwball comedy twist on Snow White and the Seven Dwarves.
Wednesday Feb. 1st.: African Queen. Why this movie, starring Bogart and Katherine Hepburn is not out on a special edition DVD is beyond me. Warner’s- get off your duff and get to work on it!
Friday Feb.3rd: I Married a Witch- great comedy featuring Veronica Lake and Fredric March that does Bewitched did more than two decades before. And it's got Veronica Lake. Some rumblings on IMDB indicate there is a remake in the works (of course). Maybe, at least, we’ll get a nice DVD treatment if it does. Did I mention it's got Veronica Lake?
On the Web:
Greenbriar has continued to be a Shelf Favortite. This week John has added some links in a post to some other cinema buff blogs and sites out there. Our favorites include:
In the Balcony (check out the "News" page for upcoming Classic film DVDs), Libertas, and The Third Banana. Check 'em out. You'll easily spend several hours reading the great posts, reviews, and checking out the images. We will probably add these to the Shelf Community soon.

January was a great month for classic film fans. Looks like Feburary might hold some surprises as well. In a later post, we'll feature a preview of classic film Box Sets to come this quarter, that will make you save your hard-earned dollars to purchase.
Enjoy!

It's OK. He fell out of the window.