a good thing (has ended) 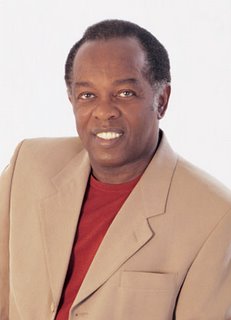 Legendary crooner (and Shelf Fave) Lou Rawls passed away Friday Jan. 6, 2006 at the age of 72. He had been battling brain cancer and lung cancer. Not only an icon as a velvet-voiced baritone singer- but his voice will always be remembered by kids who grew up watching Garfield specials and cartoons. He sang on quite a few of those shows, and just as Charlie Brown specials wouldn't be right without the jazz of Vince Guaraldi, Garfield wasn't right without Lou Rawls belting out a tune. Rawls also did voice work on "The Rugrats Movie" and was a regular on the animated, Bill Cosby-produced, prime-time show "Fatherhood" on Nick at Nite. Lady Love and You'll Never Find (Another Love Like Mine) are just two of his hits that will endure. Lou was friends with and sang with the legendary Sam Cooke and had a similar start in the business. He was also (get this) a paratrooper in the 101st Airborne during his stint in the army in the 50s. Though he recorded in various genres, his voice was unmistakeable. Sinatra once said that Lou had "the classiest singing and silkiest chops in the singing game." Rawls even began his own recording label, Rawls and Brokaw Records, in the 90s. What he was thinking in getting Tom Brokaw to help him produce records is anyone's guess. (Please forgive the lame attempt at mild mood-lifting humor. Mr. Brokaw is certainly capable of various activities)
For some great tunes check out :

Love Songs serves up a great selection (18 tracks) of Lou Rawls from his decades-spanning career. It was released just last year- so it shouldn't be to difficult to find. (Wolf and I had a hard time trying to find his Christmas CD in stores. Just criminal.) Our question is: Where is the box set? R.I.P. Lou-

One thing I'm not is a scardy cat.